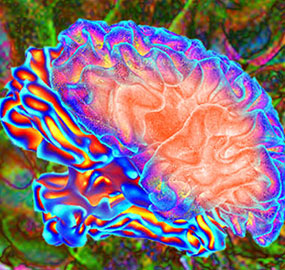 The study, which comes with a two-year, $850,000 grant from the National Institute of Mental Health (R61MH110044), will seek to answer whether tDCS can affect cognitive impairments in people with schizophrenia.

“Cognitive deficits such as cognitive control and working memory are among the most debilitating aspects of the illness and poorly treated by current medications,” said Cho, director of the Clinical Cognitive Neuroscience Laboratory at McGovern Medical School at UTHealth. “If you have cognitive impairments, daily living – doing chores, going to school, working, driving – can be very challenging.”

In the treatment, a weak electrical current is passed through the dorsolateral prefrontal cortex area of the brain between two electrodes placed on the scalp. In a previous study published in 2012 in the American Journal of Psychiatry, using tDCS on that same area of the brain was shown to reduce auditory hallucinations in schizophrenia patients.

“The theory is that the electric current will increase excitability of the brain tissue, which will help that part of the brain function better,” Cho said.

Patients remain fully conscious during the treatments, which do not require anesthesia or other medications, and are done in 20-minute periods twice a day for five days. Cho said patients generally feel nothing or a mild tingling when the therapy begins.

Researchers seek to determine the best dose of tDCS in the randomized study. Up to 100 patients will be enrolled. They will receive either a dose of the therapy or a placebo. Patients will undergo cognitive testing and imaging before and after treatment. Findings will determine if a larger study using the determined dose will follow.

For more information on enrolling, call 713-486-2839 and refer to the Brain Stimulation Study.