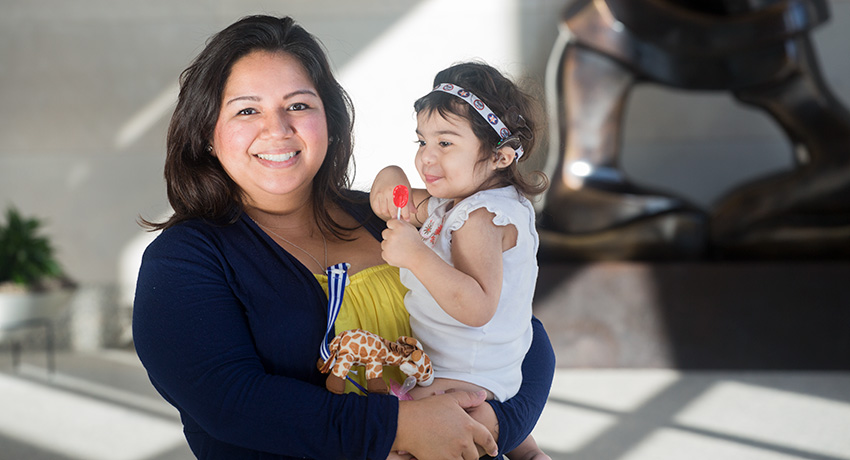 Krishna Hernandez, Bellemere’s mother, says her pregnancy was normal but as soon as her daughter was born, pediatricians noticed something “wasn’t quite right.” After her daughter was transferred to a hospital in downtown Houston, a series of tests revealed Bellemere had CHARGE syndrome – a complex genetic syndrome that involves a wide variety of physical and medical challenges. It affects 1 in 8,000 to 10,000 births per year.

Among the issues Bellemere faced included coloboma of the eye, life-threatening breathing problems, nostrils that had to be surgically unblocked, and ear abnormalities, Hernandez says. She stayed in the neonatal intensive care unit (NICU) for an entire month as doctors took the process step-by-step.

“Something that we knew—was that she was possibly going to be deaf,” Hernandez says.

For the first two years, Hernandez says Bellemere didn’t respond to her, or her husband, when they spoke. While they had initially thought it had something to do with ear tubes, they found out late last year that she could not hear at all.

The pathway to sound 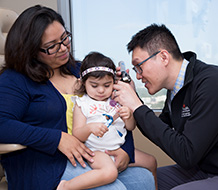 Zi Yang Jiang, M.D., with Bellemere Hernandez and her mother at a recent appointment at UT Physicians.

Medical School at UTHealth, says an MRI showed her inner ear was underdeveloped and she was missing an 8th cranial nerve.

“We had a very long discussion about whether an implant would be beneficial,” Dr. Jiang says. “Sometimes the nerve is so small that it cannot be seen on an MRI. The family wanted to give it a try.”

“We wanted her to at least have some form of hearing,” Hernandez says.

While it is typically possible to surgically implant the devices on both sides of the head during one trip to the operating room, Bellemere’s unique circumstances meant Dr. Jiang and his team had to separate the procedures.

During the procedure, a tiny processor, which connects to a microphone worn on the ear, is implanted under the skin behind the ear. The processor captures sound and transmits it to electrodes that are also implanted in the cochlea. The cochlea is located in the inner ear and converts vibrations into what the brain interprets as sound. Once the cochlea receives a signal, it activates the auditory nerve, which then directs the pattern to the brain.

“Most children do quite well with the surgery, have minimal pain, and can go home the same day,” Dr. Jiang says. “The device is usually activated a few weeks later.”

Cochlear implants have seen dramatic improvements over the years. Dr. Jiang says the implants not only have better processing power, but are also sturdier and more contoured to fit the inner ear.

“Now the implant can process a sound signal into smaller channels so the perceived signals allow the brain to create a richer and clearer sound,” Dr. Jiang says. “Also, things like Bluetooth technology have been integrated into the implant, so you can connect it directly to smartphones to play audiobooks and music.”

“We have ours set up with the TV so she can hear that,” Hernandez says. “The first time we turned it on, she started smiling.”

Bellemere has begun slowly reacting to sounds her parents and sister make. She started adjusting to the sounds just days after the device was activated.

“It’s going to be a work in progress and we’ll be going to a lot of audiologist appointments and working with a speech pathologist,” Hernandez says. “A lot of patience is needed for this, and for any parent out there that would consider putting their child through the surgery and the long journey that comes after, it’s totally worth it.”

Dr. Jiang says parents should always pay attention to how their child interacts with their environment. Children can’t complain directly about their hearing loss at such a young age, so parents should be suspicious if the child doesn’t respond to sounds or their speech is delayed. There is a window of time before the child reaches 2 or 3 years old that doctors try to correct hearing loss. After that time, the pathway nerves in the brain weaken and it becomes difficult for them to process sound information, even with hearing devices.

“A lot of cases of hearing loss can be found at birth during the hearing screening, but not all,” Dr. Jiang says. “If your child doesn’t start babbling by the first birthday or saying small, short words together by 18 to 24 months, then they need to be rechecked.”