A smile that lights up the room 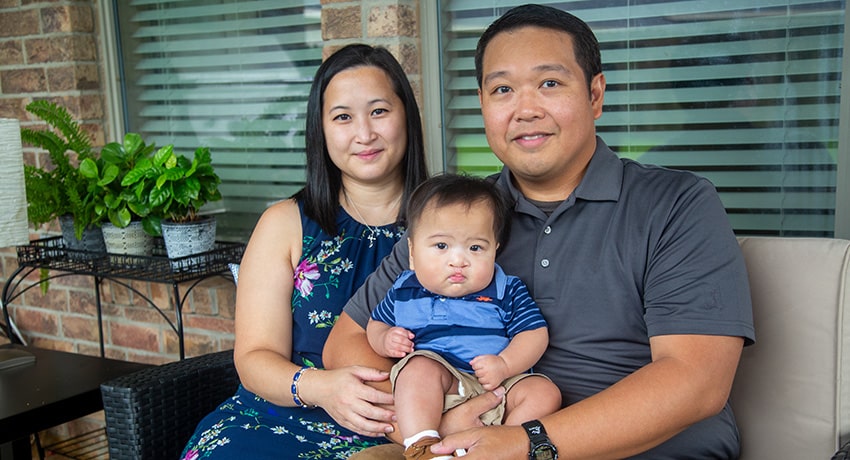 Uyen and Michael Fausto’s first two children were healthy babies at birth, with no complications during pregnancy. However, at their 20-week ultrasound appointment, they learned that wouldn’t be the case for their third son, David.

During this visit, it was discovered that there was an anomaly with David’s lip formation. A maternal-fetal medicine expert confirmed suspicions of a cleft lip and palate just one week later. In addition to this diagnosis, it was also determined that David had a rare heart defect.

“After the doctor told us the news, I blanked out,” said Uyen. “You always imagine the good things when you’re having a baby, but never something like this.”

The worry the Faustos were feeling over their son’s cleft lip and palate took a back seat to his heart condition.

“Cleft lip and palate are much more common than we thought,” said Michael. “Although it all was a lot to handle at once, we knew we could do it for him.”

Last November, David was born via cesarean section and was immediately taken to the hospital’s neonatal intensive care unit (NICU). Due to the severity of his condition after birth, Uyen could not experience a special bonding moment – breastfeeding.

“He was hooked up to many wires and machines in the NICU, and with his cleft lip and palate it was impossible for him to latch and feed,” said Uyen. “I felt at a loss being unable to calm and nurture him.”

During the first two months of his life, David remained in the NICU and underwent surgery to correct his heart defect. Throughout the entire team, the Texas Cleft-Craniofacial Team experts at UT Physicians supported David and his parents.

“We immediately fell in love with Dr. Nguyen and felt an instant connection with him,” said the couple. “Any concerns we had about our son’s care and cleft lip and palate surgery quickly subsided after our first meeting with him.”

Eventually, David would need to have surgery to repair his cleft lip. To prepare, Nguyen began the infant on a positioning strip regimen.

“The goal prior to cleft lip surgery is to passively get the anatomic segments of the lip and nose into a better position,” said Nguyen, who is also an assistant professor and director of craniofacial surgery in the Division of Plastic Surgery in the Department of Surgery at McGovern Medical School at UTHealth. “These adhesive strips help achieve that, as well as elevate the depressed part of the cleft nose.”

Doringo, who helps to provide both emotional and medical support for all cleft patients and families, helped guide the Faustos through the process of how to properly tape David with the strips. A sometimes emotional and tedious task – the tape must be changed and replaced upward of several times a day – Michael and Uyen are thankful for Doringo’s assistance.

“Leanne has continuously been our lifeline to David’s craniofacial care, and we couldn’t imagine going through this journey alone without her,” they said.

After three months of restructuring David’s lip and nose with positioning strips, he was ready and old enough for cleft lip repair surgery. While there are different degrees of cleft lip, David’s particular case was considered more challenging.

“He had a bilateral complete cleft lip, which can be more complex, particularly if the central segment juts out in what we would call a ‘fly away’ position,” said Nguyen. “This puts a lot of tension on the closure and creates a risk in wound healing.”

Although he was just a few months old, this would be David’s third surgery – the others being his prior heart procedure and the placement of a feeding tube. While Michael and Uyen were excited about David’s big day, there was some anxiety and sadness.

“We were worried some about the risks involved in having surgery, but also sad that the smile we had fallen in love with would be soon be gone,” said Uyen.

The procedure took a few hours and David remained overnight in the hospital for observation. In the recovery room, he was able to bottle feed without problems, an instant improvement.

Now four months post-operation, David is doing great. Massages are needed daily on his healed incision site to improve the quality of his scar. 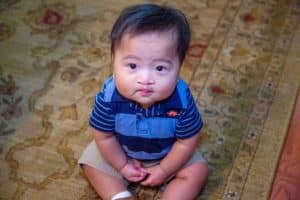 David Fausto a few months after his surgery to correct his cleft lip. (Photo by Amanda Patterson, UT Physicians)

His favorite thing to do is smile and he loves his big brothers and grandparents. Michael and Uyen are so proud of his resilience and the amount of joy he has at such a young age.

In a few months, Nguyen, Doringo, and the Fausto family will once again meet for surgery to repair his cleft palate. Until then, they are taking it one smiling and joy-filled day at a time.

“This is a lifelong journey and all we can do as parents is love our children the best way we can,” said Michael. “And just know that everyone on the Texas Cleft-Craniofacial Team cares for each and every child as if they were their own.”