A year to remember, a journey not forgotten 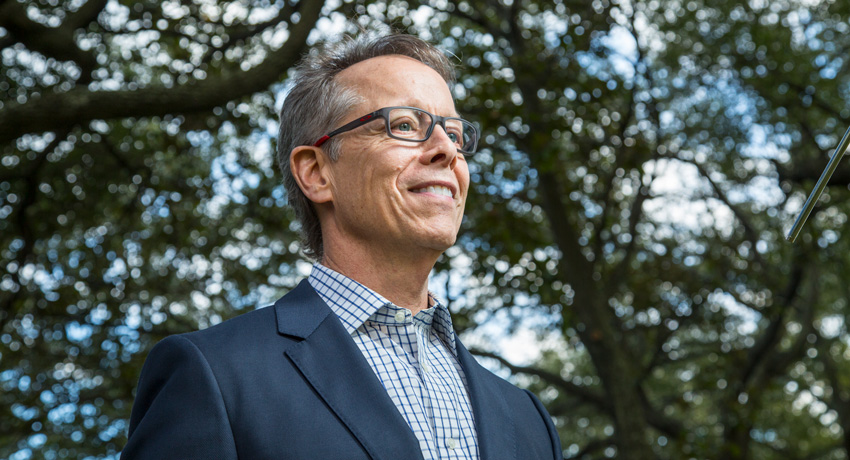 Crisp air, blue skies – and a view many may never see. At 59 years of age, Steve Dome looked out at the world from Africa’s highest peak atop Mount Kilimanjaro. About six months earlier, it was a much different picture. A hospital gown, surgery, diagnosis – and the realization that life and opportunity is very precious. 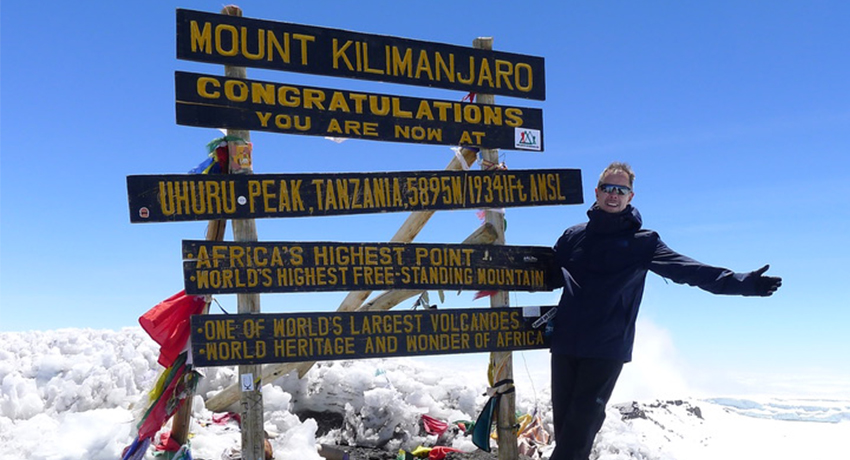 Steve Dome poses for a picture on Mt. Kilimanjaro in August 2018.

Dome’s journey from cancer to a 19,000-foot summit began in August 2016. He had a lump on his right buttock. He noticed it had changed a bit and pointed it out to his internist, but didn’t think much of it. The physician recommended a biopsy, but Dome put it off. “I didn’t think it was anything to be overly concerned about,” explained Dome, matter-of-factly.

In the spring, he noticed the lump had gotten larger, so he made an appointment with Steven Mays, MD, a UT Physicians dermatologist and associate professor at McGovern Medical School at The University of Texas Health Science Center at Houston (UTHealth).

“Dr. Mays’ team met with me and Dr. Duncan,” said Dome. “She [Dr. Duncan] examined me and recommended surgery.”

“I knew from my training at MD Anderson Cancer Center that Mr. Dome could very well have soft tissue sarcoma,” said Casey B. Duncan, MD, an assistant professor at McGovern Medical School. “The lump looked like other cases I had seen.”

Soft tissue sarcoma is a rare type of cancer that begins in the tissues that connect and surround other body structures such as muscle, fat, blood vessels, nerves, tendons, and joints. Besides a lump on the skin, other symptoms of sarcoma include abdominal or extremity swelling, bloating, fatigue, or weight loss that can’t be explained due to injury or sickness. The American Cancer Society estimates around 13,000 people in the United States were diagnosed with soft tissue sarcoma in 2018. Unfortunately, there are no screening tests for soft tissue sarcoma like there are for breast or colon cancer, so many times the disease presents at an advanced stage.

Imaging was ordered to confirm whether there were any other concerns in Dome’s lymph nodes or lungs. When the images came back clear, a surgery date was scheduled at Memorial Hermann-Texas Medical Center. “I honestly didn’t think it was cancer,” said Dome. “Dr. Duncan was very compassionate and knowledgeable. She was honest and I felt comfortable heading into surgery.”

“During the outpatient procedure, I removed the lump and some normal tissue around it,” Dr. Duncan explained. “If it came back as cancer, I wanted to make sure we were thorough in removing what we could. That reduces the risk that the patient has to begin oncology treatments such as chemotherapy, radiation, or both, and reduces the risk of the cancer returning in that same location.”

The climb to a positive outcome

About a week later, the lab results came back that the tumor was cancerous. “The waiting was unnerving,” said Dome. “I was surprised it came back as cancer – and then the thought of chemotherapy and radiation was scary. However, I didn’t want to rush into making that decision. I respected that they were analyzing the big picture and best course forward. I had an oncologist and radiologist who were also on my team. When they came back with the news that all of the cancer had been removed, it was a relief.”

It’s an outcome that Dr. Duncan hopes for all of her surgical oncology patients. “He was a really healthy guy,” said Dr. Duncan. “His results were awesome. I wish I could do that for everyone. This is why I pursued medicine. I just want to take good care of patients and improve their quality of life.”

Dome says he sings her praises. “I have recommended her to other people. I also tell others not to wait if you suspect anything suspicious. It was concerning to think that waiting may have allowed the cancer to spread to other parts of my body.”

For Dome, it took less than a month to diagnose, remove, and hear the news he was cancer-free. In August 2018, he made his journey to Mount Kilimanjaro. For eight days, he traveled with a guide through various environments from tropical to alpine, to reach the summit. It was the coldest winter the region had experienced in about 20 years. Afterward, he continued with walking safaris.

“It has changed my perspective on everything,” said Dome, who still sees Dr. Duncan every three months for follow-ups. “I don’t delay now.”