In the driver’s seat 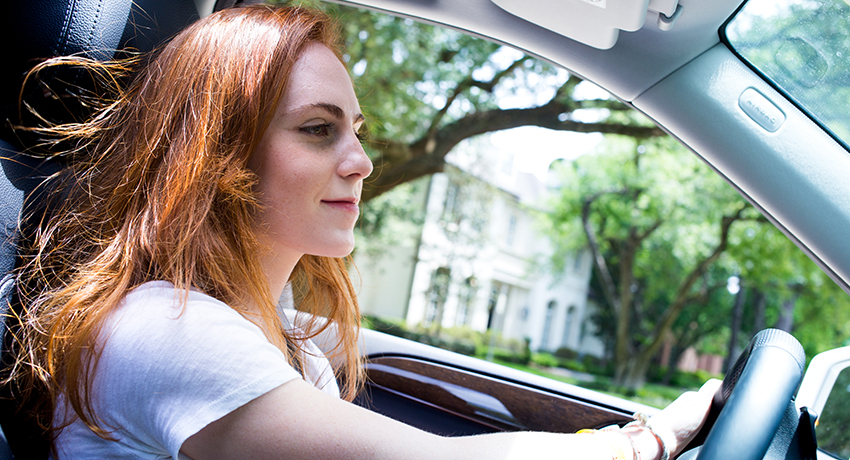 Getting your driver’s license is a liberating moment, but for Christine Melody it meant so much more than the freedom of the open road. Finally getting behind that wheel marked an end to the phase of her life where she was held captive by epilepsy and the happy beginning of living life to the fullest.

It had been a torturous journey of frightening seizures and a search for a successful treatment spanning almost two decades. The crucial turning point came when Christine and her parents, Martha and Tom, met Nitin Tandon, MD, professor in the Vivian L. Smith Department of Neurosurgery at McGovern Medical School at UTHealth and director of the Epilepsy Surgery Program at the Mischer Neuroscience Institute at Memorial Hermann-Texas Medical Center.

“We spent years traveling across the country searching for answers and for hope. But no one gave us the confidence to proceed with surgery. Then right here on our doorstep in Houston, we met Dr. Tandon, who was amazing and made us realize not having surgery could be even more dangerous,” Christine says.

Tandon is at the forefront of cutting-edge brain surgery that can effectively treat epilepsy, through pinpointing the source with fine electrode probes and tackling it with laser precision to eliminate seizures from patients’ lives.

Wanting to lead a normal life, Christine and her parents had tried to do everything possible to avoid letting seizures hold her back. Raised with three brothers, she was tough and, despite warnings from doctors, took it upon herself to excel in gymnastics and in cheerleading. She became so adept at masking her condition, people were often oblivious to it. But sometimes concealing a seizure simply wasn’t possible.

“At a cheerleading competition I suddenly sensed a bad episode coming. I walked away from the line and started mumbling and fidgeting. Unable to fully control my movements, it was like being a puppet controlled by someone else,” Christine says, “I hated it — I felt so embarrassed, frustrated and alone.”

Often, only her closest friends and family could spot the telltale signs of a seizure. So when she moved away to study at college, the frightening reality of her vulnerability was evident.

“Things went downhill fast. I was having up to 20 seizures a day and being away at college became a constant struggle. I had trouble concentrating and during seizures, I couldn’t even write,” Christine says.

“Once I found myself wrapped in a towel in the middle of my dorm lobby. I remember getting out of the shower, but that’s when the seizure must have taken hold. It was quite scary and of course my mom was worried sick on the end of the phone calling me, frantically asking ‘What happened?’”

Christine Melody with her parents, Martha and Tom

Keys to a new life

Her parents realized something had to change, and, thankfully, Tandon’s surgical talents held the key.

“He was the answer to all our prayers. From the first consultation we knew we were finally on the right path,” says her mother, Martha. To this day, she is still haunted by the memory of when she found her little 2-year-old girl lying unconscious in her crib after suffering a fever-induced static seizure. “Doctors said she was lucky to survive and escape major brain damage. We felt so relieved and grateful,” Martha says. “Then one day at preschool she had another seizure. Her life continued to be plagued by them, and I worried endlessly, especially when she went swimming and horse riding. It constantly preys on your mind.”

Mesial temporal lobe epilepsy, which affects Christine, represents around a quarter of all epilepsy cases. The least invasive surgical option is called laser interstitial thermal therapy, more commonly known as laser ablation, which burned away the scar on her brain left by the aftermath of her very first seizure.

“After Dr. Tandon explained the procedure and his track record in performing it, we didn’t hesitate. He even put me in touch with other patients who had been through the same thing,” Christine says.

Armed with the precious ‘Dammit Doll’ given by a friend in recognition of her plight, a special prayer bracelet and a symbolic bracelet in memory of her priest Father T.J. Martinez, Christine went in for surgery more than a year ago. It was a success.

“When I woke up, the first thing I did was cry. Nurses reassured me it all went fine and I said, ‘These are tears of joy!’ The biggest weight had been lifted from my life and my whole family. Finally I was free — we all were,” Christine says.

A few months later, to celebrate her newfound independence, Christine received something extra special for her 21st birthday. “I couldn’t believe it when my parents led me outside to a brand new car on the driveway. I’d wanted to drive so long and had almost lost hope,” she says. Making the most of her new life, there have been plenty of road trips as well as a Bruno Mars concert in Las Vegas. “Before, I always worried that bright lights might trigger a seizure, but now I can just relax and enjoy it. Everything about my life is different,” she says.

Passionate about helping others, Christine is volunteering with the Epilepsy Foundation and speaks with people who have the condition and may be considering surgery. “I just want people to know there’s light at the end of that long, dark tunnel, and it’s really worth getting there,” Christine says. “I couldn’t be happier right now.” Her parents are equally thrilled.

“It’s hard to express how blessed we feel. Dr. Tandon hasn’t just given our daughter the ability to drive — he has given her wings to fly,” Martha says.

Such transformational results are the driving force behind Tandon’s work.

“Outcomes such as these, and the enormous impact we have on the lives of not just the individual, but the whole family, is exactly what motivates us each day to come up with new approaches and cures for epilepsy,” Tandon says. “Being able to help people lead more fulfilling lives is such a privilege, and I’m delighted to have been given the opportunity to put Christine back in the driving seat.”