Innovative procedure gives epilepsy patient the family of her dreams 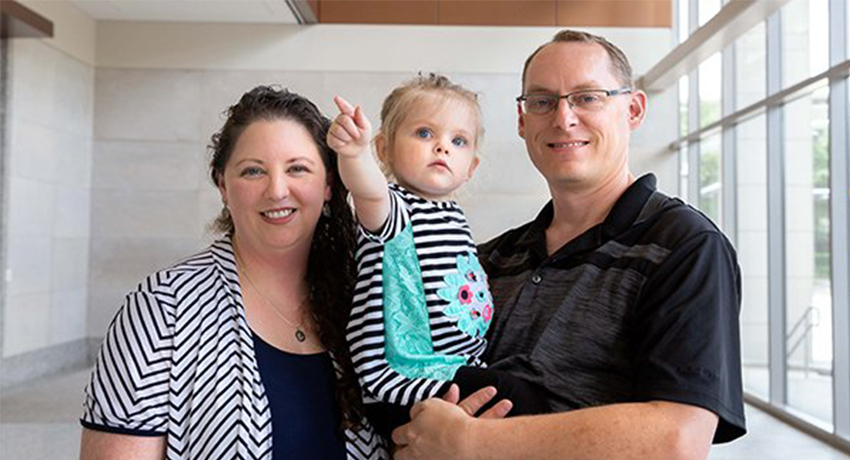 Alisha's life and family blossomed after a pioneering minimally invasive surgery stopped her from having seizures. (Photo by Maricruz Kwon/UTHealth) 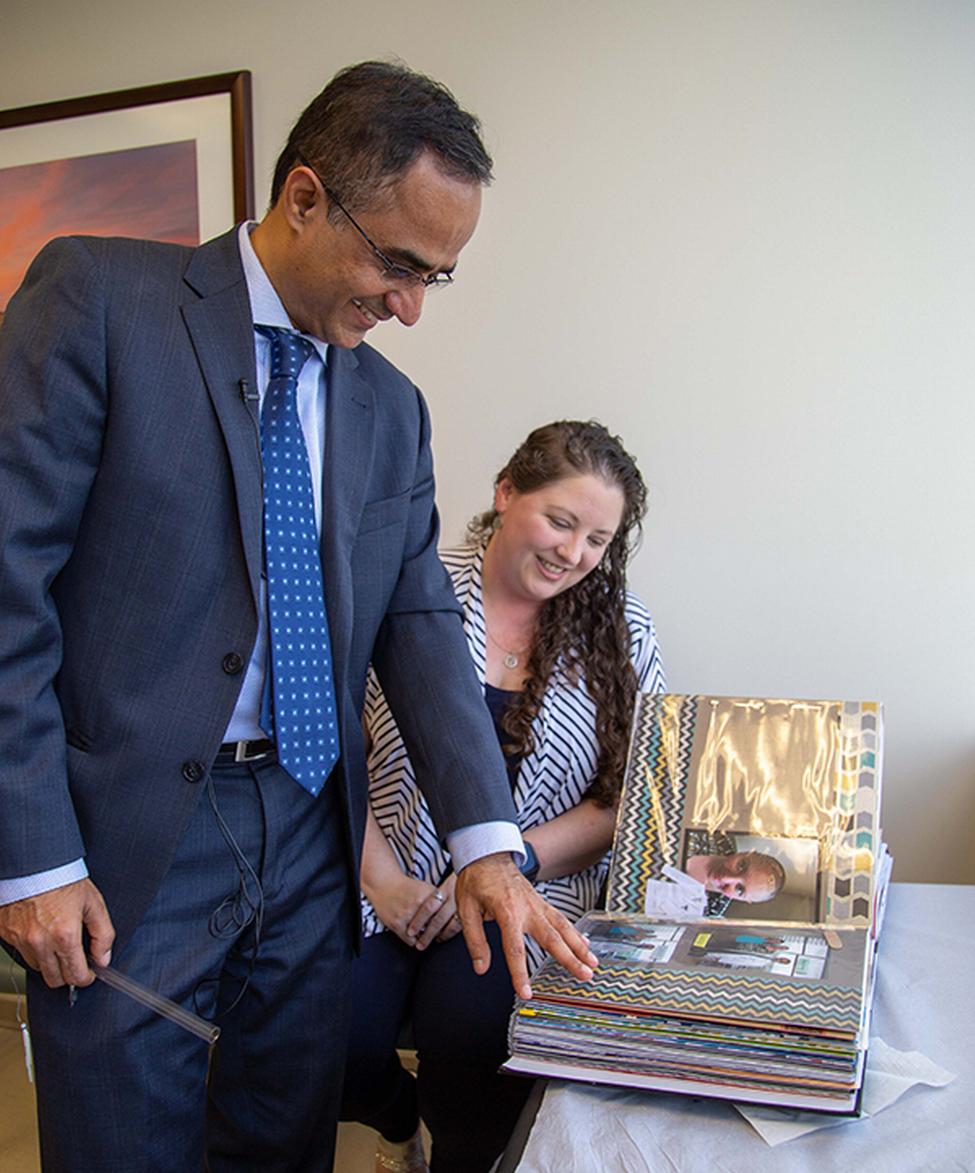 Nitin Tandon, MD, studies the scrapbook Mehaffey made chronicling her journey to being seizure-free. (Photo by Maricruz Kwon/UTHealth)

A pioneering minimally invasive procedure gave Alisha Mehaffey the chance to do something many take for granted – start the family she feared would never be possible.

Mehaffey had suffered for years from debilitating seizures that would strike without warning.

Now chasing after her 2-year-old daughter Scarlett, driving, and working full time, Mehaffey, age 36, is enjoying a new lease on life. She credits her transformation to Nitin Tandon, MD, professor in the Vivian L. Smith Department of Neurosurgery at McGovern Medical School at The University of Texas Health Science Center at Houston (UTHealth), who performed a procedure that is giving new hope to drug-resistant epilepsy patients like Mehaffey.

“Dr. Tandon was the light at the end of a very long, dark tunnel. Although the procedure sounded daunting, it was nothing compared to the endless trauma of having seizures,” Mehaffey said. “My surgery gave me back my own freedom and the confidence to have a baby after so many years of feeling out of control.”

Her battle with epilepsy began 16 years ago and changed everything.

“I had my first seizure three days before graduating college with a degree in chemistry. I was at home watching a movie with my mother after taking a final. She said I got a strange look on my face. It felt like I was spinning around in circles,” Mehaffey said. “A few moments later I was on the floor having a grand mal seizure and an ambulance took me to the hospital. I was diagnosed with epilepsy and everything completely changed. My application to become a pharmacist was rejected and I was banned from driving for two years.”

Determined to be as independent as possible, Mehaffey adjusted her career plans and eventually began working at an airport in Little Rock, Arkansas. She met that someone special and married him, and her seizures were under control.

“I hadn’t had a seizure in almost a year at that point and we were very happy,” Mehaffey said. “Then one happened out of the blue. First it was once a month, then three, then five. After a seizure, which always came without any warning, I couldn’t function. The only thing that brought relief from the debilitating headaches I always had after a seizure was sleep. It was like hitting a reset button.”

The reactions of bystanders who witnessed her seizures was as distressing as the physical toll on her body.

“People stare at you like you grew another head. Sadly, they don’t know what is going on, so they panic and act like it’s contagious. My self-esteem hit rock bottom,” she said.

The number of seizures escalated to three or four a week, to the point that she became a prisoner in her own home, afraid to even go for a walk.

“A friend once found me wandering aimlessly around the neighborhood following a seizure. After that I didn’t want to leave the house alone in case it happened again,” Mehaffey said. “I was like a little lost child, so having one of my own seemed out of the question. I could scarcely look after myself.”

Now living in Corpus Christi, Texas, she sought answers from a neurologist, who recommended seeing experts at UT Physicians.

“I was told, ‘I think I know someone who can fix you,’ and set up an appointment with Dr. Tandon right away. He was incredibly knowledgeable and described exactly what the surgery involved,” Mehaffey said.

“I hope Alisha’s inspiring story will help everyone to understand more about epilepsy and empathize with those affected,” Tandon said. “It also shows what tremendous strides we’ve made in successfully eradicating seizures from patients’ lives and I feel so privileged to be harnessing this technology to help people fulfill their greatest potential.”

Tandon is chief of epilepsy surgery at the Texas Comprehensive Epilepsy Program. It holds a Level 4 designation, the highest possible, by the National Association of Epilepsy Centers. Inpatient clinical care is provided at Memorial Hermann Hospital-TMC.

“We have the world’s largest experience, and the expertise that comes from that, in laser ablation for this rare condition, and are establishing a specialized center that includes molecular biologists and geneticists to study and optimize treatment so that we can continue to offer the most caring, comprehensive treatments to our patients. Increasingly, we have patients coming from across Texas as well as from abroad to avail themselves of this treatment option,” said Samden Lhatoo, MD, John P. and Kathrine G. McGovern Distinguished Chair, executive vice chair of neurology at McGovern Medical School, and director of the program. 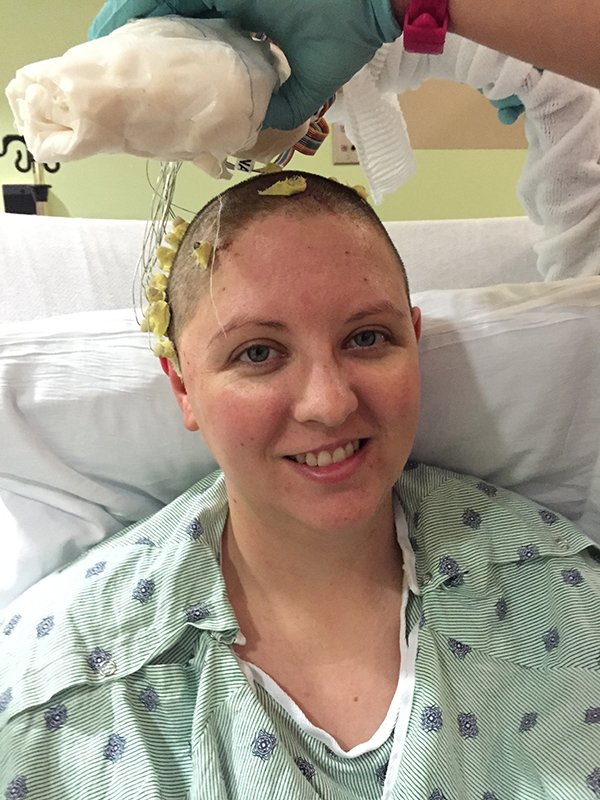 The probes, thinner than raw spaghetti, were threaded inside the brain through small holes in the skull for a 10-day observation period. This enabled Tandon to pinpoint the precise source of the seizures in Mehaffey’s brain and plan how to tackle it with laser precision. The level of accuracy and surgical skill were critical because the lesion was very close to her optic nerve, which connects the eye to the brain.

“Dr. Tandon didn’t sugarcoat the surgery and was very open about the risks. I could have gone blind, so it was an extremely difficult decision,” Mehaffey said. “After carefully talking it through with my husband, we decided the downsides would be worth the reward.”

Another major concern was what was going to happen to her hair.

“That was the hardest thing to wrap my head around because my hair had been halfway down my back forever. I couldn’t imagine it being short, let alone shaved off completely,” Mehaffey said. “My amazing mother-in-law knew how upsetting I found this so she discovered a place that makes wigs out of your own hair and had one made for me. Suddenly there was a solution.”

Mehaffey made a scrapbook of photos and memorable items, including one of the probes, chronicling her journey. She hoped one day to share it with her own child – the child she was too scared to have when her life was constantly disrupted by seizures.

“Before we had even tried to adopt an older child because I thought that might be more manageable. But every time it fell through, which was heartbreaking. In hindsight, it must have been fate,” Mehaffey said.

Two months after the SEEG procedure, she returned to the hospital for laser ablation surgery to burn the lesion away.

“It lasted about 10 hours. The biggest relief was waking up and being able to see. I was allowed to leave the next day and felt well enough to attend a family reunion in Galveston the day after,” Mehaffey said. “I had no pain but my vision became blurry. Dr. Tandon assured me this was temporary due to swelling putting pressure on the optic nerve. He was right and it cleared up after a month.”

The big question remained whether the surgery had successfully stopped her seizures.

“Dr. Tandon said he thought he had removed all the affected area, but we would have to wait and see to be sure,” Mehaffey said. “Two weeks passed without any seizures, then a month and six months. Slowly but surely I started to believe it had worked and after a year, I thought ‘I guess they really are gone for good.’ ”

The following year, Mehaffey became pregnant with Scarlett and her life with husband Randall, who works as a crane dispatcher, continued to blossom at their home in Corpus Christi.

“We were over the moon. Without having to worry about seizures, everything fell into place. Scarlett is so special and I’ve just started working as a procurement specialist. It’s the best job I’ve ever had with really wonderful people,” Mehaffey said. “At last I feel back in control of my life and it’s all thanks to getting up the courage to take that leap of faith and finding Dr. Tandon, who is such a talented surgeon. We feel very grateful and blessed.”

According to the Epilepsy Foundation, 3 million adults in the U.S. have active epilepsy and studies suggest that around a third of cases do not come quickly under control with medication.

Tandon’s recent study, published in JAMA Neurology, showed that patients like Mehaffey who had the least invasive evaluation procedure – which has minimal blood loss and less pain than the standard procedure – experienced fewer complications. Those who went on to have brain surgery were significantly more likely to be seizure-free than patients who had the more invasive procedure, which includes a large opening of the skull, known as a craniotomy.

“I am delighted with the outcome of Alisha’s surgery, which has enabled her to achieve things she previously considered beyond reach,” Tandon said.