Our MALS team includes multiple specialists that work together to better understand and treat the condition. 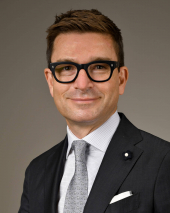 Gustavo Oderich, MD, FACS, is professor and chief of vascular and endovascular surgery in the Department of Cardiothoracic and Vascular Surgery at McGovern Medical School at UTHealth. He is also the director of the Advanced Endovascular Aortic Program at Memorial Hermann – Texas Medical Center. Dr. Oderich joined the UTHealth faculty in July 2020, after relocating from Minnesota, bringing over two decades of experience from his practice at Mayo Clinic, where he practiced and served as immediate past chair of the vascular and endovascular division. His clinical expertise is focused on the management of complex aortic diseases such as aneurysms, dissections, trauma, and aortic pathology. He specializes in the treatment of chronic mesenteric ischemia and median arcuate ligament syndrome, with a focus on open surgical and endovascular repair. He is a genuine academic surgeon who has become world-renowned for advancements in fenestrated and branched stent-graft technology to treat complex aortic aneurysms and dissections. He has edited three books on complex endovascular aortic repair, vascular disease, and mesenteric arterial disease. He serves as associate editor in two international journals and is a member of the editorial board of over 30 surgical and medical journals. Oderich’s bibliography is extensive, with over 600 publications in peer-reviewed journals, abstracts, and book chapters. He continues his research efforts on the treatment of complex aortic diseases, connective tissue disorders, and MALS.

Brooks D. Cash, MD, is professor and chief of gastroenterology, hepatology, and nutrition in the Department of Internal Medicine at McGovern Medical School, where he is also the Dan and Lillie Sterling Professor of Clinical Gastroenterology. Cash received his undergraduate degree in business administration (finance) with honors from The University of Texas in Austin. He earned his medical degree from the Uniformed Services University of the Health Sciences in Bethesda, Maryland, and completed his internship, residency, and gastroenterology fellowship at the National Naval Medical Center in Bethesda. Cash served for 24 years in the U.S. Navy, retiring at the rank of captain. He was primarily stationed at Bethesda Naval Hospital and Walter Reed National Military Medical Center where he served as chief of gastroenterology, chief of medicine, and ultimately deputy commander for medicine. He also holds an appointment as a professor of medicine at Uniformed Services University of the Health Sciences. Cash is a diplomat of the American Board of Gastroenterology and a fellow of the American College of Physicians, American College of Gastroenterology, American Gastroenterological Association, and the American Society for Gastrointestinal Endoscopy. He has chaired numerous professional society committees and has served as course director for multiple national and regional scientific congresses. He has authored over 200 articles and book chapters on a wide variety of gastrointestinal topics and serves as an associate editor for the American Journal of Gastroenterology. His clinical interests include disorders of brain-gut interaction, colorectal cancer screening alternatives, and Barrett’s esophagus. A sought-after lecturer at national and international medical education meetings, he was recognized as a 2020 Super Doctor by Texas Monthly magazine and was recently named a 2020 Rome Foundation Fellow.

Dr. Andrew W. DuPont is the director of clinical investigation in gastroenterology, director of the Inflammatory Bowel Disease Program and associate professor at McGovern Medical School at UTHealth.

Dr. DuPont has served on multiple national and regional medical committees and is active in numerous medical societies. In addition to authoring several textbook chapters, he has published multiple studies on various gastrointestinal disorders. As well as caring for patients with general gastrointestinal disorders, he has a special clinical and research interest in inflammatory bowel disease (IBD), irritable bowel syndrome (IBS), intestinal microbiota, enteric infections, and colon cancer screening.

Thanila Macedo, MD is associate professor of radiology in the Department of Radiology at McGovern Medical School at UTHealth. He is also the director of the vascular imaging. Dr. Macedo joined the UTHealth faculty in July 2020, after relocating from Minnesota, bringing over two decades of experience from his practice at Mayo Clinic, where she practiced and served as immediate past head for the Gonda Vascular Center Vascular Ultrasound Lab. She has clinical expertise in non-invasive vascular imaging including ultrasound and computed tomography angiography.

Dr. Rodrick C Zvavanjanja, MD, Msc, FRCR(UK), DABR(DR/VIR) is associate professor of diagnostic & interventional radiology and vice-chair of diversity, equity and inclusion in the Department of Diagnostic and Interventional Radiology at McGovern Medical School at UTHealth. He is a key founding member of the UTHealth and Memorial Hermann Hospital Vascular Anomalies Multi-Disciplinary Clinic, and one of the founding members of the UT Physicians at UTHealth Median Arcuate Ligament Syndrome (MALS) Team. He is a fellow of the Royal College of Radiologists United Kingdom, and has published multiple peer reviewed articles and book chapters. He has presented abstracts and talks at international and local scientific/academic meetings. He is a passionate teacher who is a recipient of multiple Dean’s teaching excellence awards. Dr. Z is involved with research efforts on Median Arcuate Ligament Syndrome (MALS), and several other multi-center, and local clinical trials.