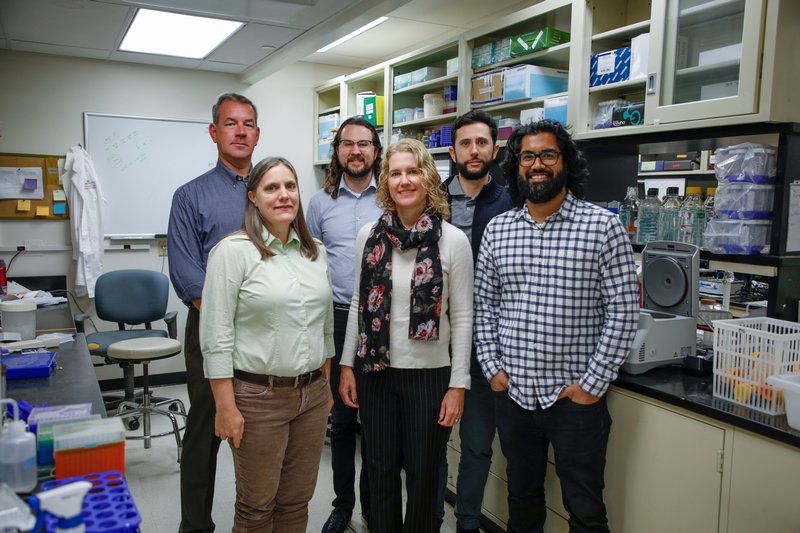 The labs of Danielle Garsin, PhD, and Michael Lorenz, PhD, have made a novel discovery on a potential therapeutic against fungal infections. (Photo by Danny Palomba/UTHealth Houston)

Recent research from the labs of Danielle Garsin, PhD, and Michael Lorenz, PhD, professors in the Department of Microbiology and Molecular Genetics with McGovern Medical School at UTHealth Houston, which identified a novel potential therapeutic against fungal infections, has been published in Nature Communications.

Fungi are a major source of disease, ranging from well-known conditions like thrush and yeast infections to more deadly infections in immunocompromised patients, including patients with AIDS, those undergoing chemotherapy, and organ transplant patients with implanted devices like bloodstream catheters.

“Unfortunately, there are few effective antifungals, and resistance to those that are available is rising,” Garsin said. “While we often think of an infection as a contest between a human patient and a pathogen, we have many species of microbes in our body, and the role of a healthy microbiome in preventing disease is largely unknown.”

In previous studies, the two labs discovered that a protein produced by the bacterial species, Enterococcus faecalis, which they called EntV, was able to block Candida albicans, a major fungal pathogen. However, the protein’s size and other factors prevent EntV from being a viable potential therapeutic.

“In this new paper, we optimized EntV as a potential therapeutic by deciphering its three-dimensional structure,” Garsin said. “Using the structure as a guide, we were able to design fragments that were tested in several complementary assays, eventually designing a short sequence of 12 amino acids — less than one-fifth the size of the original protein, that retained full antifungal activity.”

The optimized EntV or “12mer” proved affective against C. albicians strains that are resistant to current antifungal drugs as well as other fungal species. The lab also demonstrated that the 12mer was effective in oral, bloodstream, and catheter infection models.

Garsin, an expert in bacterial pathogens, and Lorenz, an expert in fungal pathogens, collaborated with structural biologists to identify the three-dimensional shape of EntV, allowing the team to design and test peptides rapidly in Garsin’s lab. After identifying promising fragments, they then tested EntV’s efficacy against fungal structures that contribute to disease in Lorenz’s lab.

“This rigorous iterative process took advantage of the expertise of both groups collaboratively to demonstrate the potential of these fragments for further clinical optimization,” Garsin said.

Through their research, the Garsin and Lorenz labs identified a potential therapeutic against a variety of fungal infections that showed broad-spectrum efficacy. As fungal infections continue to adapt and resist current drugs, new possible therapeutic options like the one created by these labs will become necessary.

“Antifungal drug development is particularly challenging because fungal cells and animal cells are very similar, so it is difficult to find drugs that are effective but not toxic,” Lorenz said. “Our identification of a candidate compound that meets these criteria is a significant step toward providing additional tools to treat fungal infections.”

Moving forward, the labs will look to further develop EntV peptide fragments to improve stability and efficacy through rational and random approaches and also hope to identify the mechanism of action.

“Interestingly, and unlike the currently approved therapeutics, the peptide does not kill or even inhibit the growth of the target fungi. Rather it appears to inhibit disease-causing behaviors,” Lorenz said. “This is an uncommon mode of action and further understanding how this occurs can tell us more about the mechanisms by which fungal pathogens infect humans, and that might lead to additional ideas for therapeutic development.”

Authors for the paper titled, include Melissa Cruz and Shantanu Guha, PhD, from the Garsin Lab and Shane Cristy and Giuseppe Buda De Cesare, PhD, from the Lorenz Lab.