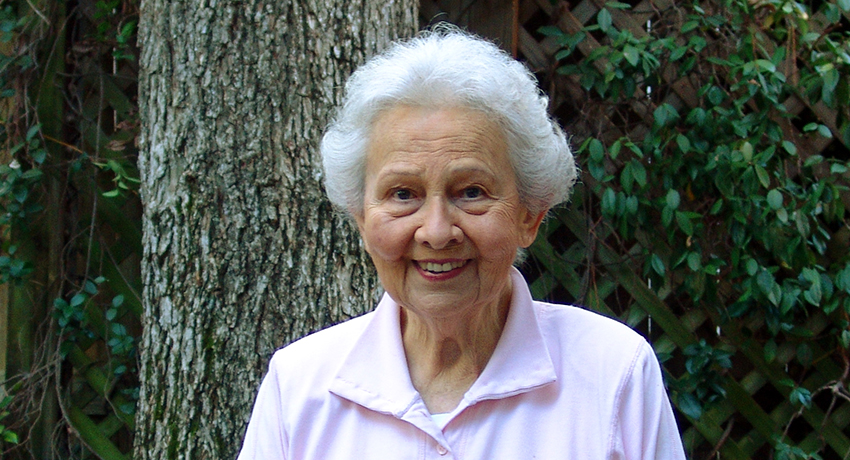 Winnie O'Brien was one of the first in Houston to have a new procedure to prevent stroke.

“Knowing I was at a high risk for a stroke was very frightening,” says 90-year old Winnie O’Brien. “I was told by my physician that my carotid artery was completely blocked in my neck.”

Due to that risk, O’Brien was referred to Kristofer M. Charlton-Ouw, M.D., a UT Physicians vascular surgeon. She was among the first in Houston to have a new groundbreaking procedure called transcarotid artery revascularization, or TCAR, which removes the carotid blockage by temporarily reversing blood flow to the brain.

“TCAR is an exciting and promising surgical technique that significantly reduces the risk of stroke in patients who need surgery to clear up carotid artery blockages,” says Charlton-Ouw, associate professor in the Department of Cardiothoracic and Vascular Surgery at McGovern Medical School at The University of Texas Health Science Center at Houston (UTHealth). “The TCAR procedure is performed through a small incision at the neckline that is smaller than the conventional incision, helping the patient have less pain and a quicker recovery.”

In a conventional carotid surgery, called carotid endarterectomy (CEA), there is a risk of a stroke if a piece of the blockage breaks off and moves to the brain. TCAR has proven to be safer in eligible patients because it also uses a special advanced system to temporarily reverse blood flow, so any debris that breaks off is moved in the opposite direction of the brain.

“Twenty years ago, it was unheard of to reverse blood flow to the brain,” says Charlton-Ouw, who is one of the few surgeons in the Gulf Coast area who performs this advanced treatment option. ”The flow reversal in this new procedure is what keeps debris away from the brain.”

Because the brain is fed oxygenated blood by several other arteries, this temporary blood flow reversal in the carotid artery is not a problem.

“TCAR is designed to protect the brain from most sizes and types of debris, such as dangerous bits of plaque, that can occur when we implant a stent into the carotid artery,” adds Charlton-Ouw, who performs surgery at Memorial Hermann – Texas Medical Center. “After the stent is inserted to stabilize the blockage, the blood flow reversal is turned off and blood flow resumes in its normal direction.”

O’Brien was a good candidate for this new advanced technique. “A good candidate,” explains Charlton-Ouw, “is someone who has additional medical challenges, or is older in age, has carotid artery disease and is at risk for the conventional procedure.  We have to judge the risks and benefits for each patient. With TCAR, we can increase the range of patients we treat.”

O’Brien is an example of why age is not the only factor in evaluating patients for this procedure.  “The answer is simple,” he says. “She is still very active, working in her garden every day and she has remained very independent.”

“I liked that this new method was less invasive and meant less overall surgery,” says O’Brien. “I had the TCAR procedure on Oct 13, 2017 and I went home the next day with a small band aid on my neck. My recovery has been smooth sailing and I feel great.”

O’Brien, always upbeat and positive, is thankful she has the energy to keep up with her eight grandchildren and nine great-grandchildren. “Being around young people keeps me young,” says O’Brien.

She highly recommends Charlton-Ouw. “He was wonderful and took time to explain the new procedure to me in detail,” O’Brien says. “He gave me tremendous confidence about the advantages of TCAR.”

“A massive stroke can be very debilitating and TCAR is a major step forward in reducing the risk for qualified patients such as Winnie,” adds Charlton-Ouw.