Together with her parents, Alexis reunited with Fletcher outside of McGovern Medical School at UTHealth for the first time in nearly three decades. (Photo by Cody Duty/UTHealth)

When Kathy Shelly recalls the planning involved in scheduling her 20-week anatomy ultrasound so that her husband, Don Shelly, could also attend the appointment nearly 31 years ago, she thanks God that Don was able to be there.

“I am just so grateful I didn’t have to be alone in that moment,” she said.

They were told their baby, which they would soon learn was a girl, would likely never walk or talk, let along have a meaningful life. Alexis had an occipital encephalocele, a rare birth defect where there is a lack of bone fusion on the skull. Advised by their original physician to terminate, instead the couple sought the expertise of Stephen Fletcher, DO, a pediatric neurosurgeon with The University of Texas Health Science Center at Houston (UTHealth). 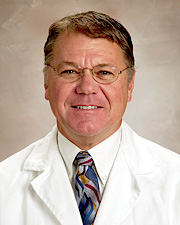 Stephen A. Fletcher, DO

Alexis had a gap in her skull through which a mass, that included brain matter, protruded. Her parents were told it would require surgery very soon after her birth, and there were no promises she would meet developmental milestones. However, according to Fletcher, an associate professor in the Department of Pediatric Surgery at McGovern Medical School at UTHealth, his philosophy as a neurosurgeon is simple: “You’re not going to have a productive life as a surgeon if you don’t try.”

Alexis underwent her first operation at 5 weeks old, and her parents recalled seeing Fletcher, a pediatric neurosurgeon with UT Physicians who attends at Children’s Memorial Hermann Hospital, walking toward them as they made their way to the recovery room. “He stopped us to tell us things went really well, which meant so much to me,” Don said.

Fletcher’s surgical approach to encephaloceles is notably different from other neurosurgeons. In Alexis’s case, he did not remove the protruding brain matter but instead folded it back into her skull.

“Traditionally many surgeons think the excess tissue is nonfunctioning, and most patients tend to have a lot of brain tissue protruding. I aim to keep as much intact as possible, like we did in her case,” he said.

However, like many encephalocele patients, Alexis developed hydrocephalus shortly after her first operation – a result of fluid building up in the brain that placed pressure on the tissue. Fletcher performed a second surgery to place a shunt nine days after the initial surgery. In a shunt procedure, a plastic tube is surgically implanted to help divert excess cerebral spinal fluid away from the brain into the abdomen to be absorbed into the bloodstream.

Alexis and her parents look over a scrapbook with Fletcher. (Photo by Cody Duty/UTHealth)

Only then did Kathy feel confident enough to decorate her nursery and allow friends and family to throw a baby shower. Photos taken at the event show her cradling Alexis in her arms.

Alexis underwent her third brain surgery when she was 4 months old to replace the shunt. Though it took her a few extra months to get the hang of walking, before her parents knew it, she was a roaming chatterbox by the time she was 19 months old.

They decided to enroll Alexis in dance classes to help with her coordination, and she fell in love with it. “I remember watching her at one of her recitals years ago, and just remember thinking, ‘Here was my baby, who was told she’d never be able to walk or talk, dancing through life,'” Kathy said.

Alexis would go to meet all of the developmental milestones, making the A-B honor roll in high school, and she graduated from Houston Baptist University in 2012. As a journalism student, she regularly placed on the dean’s list for her academic performance. She worked at Moody Gardens in Galveston for more than three years, leading public relations efforts for the tourist destination.

Alexis turned 30 this year and recently joined the media relations team at UTHealth, covering neurosurgery and neurosciences – promoting the work of the same doctor who saved her life. When Fletcher made the connection after their first email interaction, he was thrilled. “To hear from a patient three decades later who exceeded every expectation, it’s surprising in a very good way,” he said.

Together with her parents, Alexis reunited with Fletcher outside of McGovern Medical School at UTHealth for the first time in nearly three decades. Tearful, Alexis expressed her gratitude. “Thank you feels so insignificant, but there’s no other words, just thank you,” she said.

Alexis on Easter 1991, shortly after returning home from her first surgery to remove her occipital encephalocele. (Photo courtesy of the Shelly family)

“Looking at her 30 years later and to hear of all that she’s been able to accomplish, that to me is what makes my job worth it,” Fletcher said.

Sharing cookies for Alexis’s belated birthday at their reunion. Don, a huge history buff, told a story about the significance of her birthday. “On Feb. 22, the United States hockey team beat the Soviets during the 1980 Winter Olympics, dubbed the ‘The Miracle on Ice.’ But that Feb. 22 doesn’t have anything on mine, the day my miracle was born,” he said.