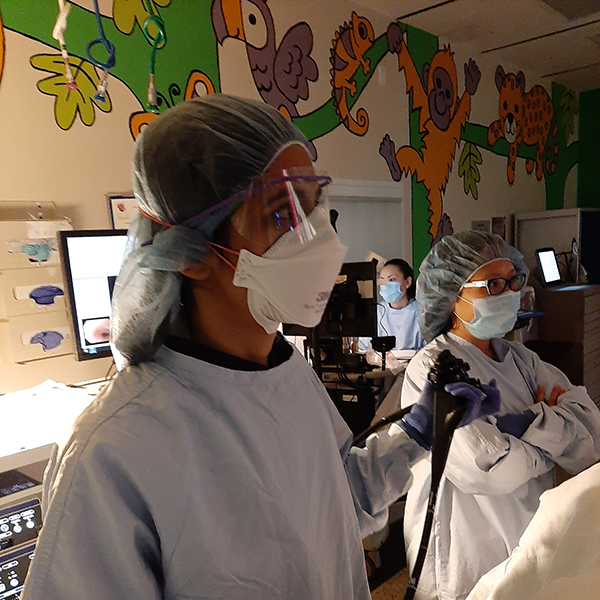 A novel diagnostic tool born out of research from the Department of Pediatrics could reduce the need for multiple endoscopies for those who suffer from eosinophilic esophagitis (EoE). (Photo by McGovern Medical School)

Published in the Oct. 11, 2022 issue of Journal of Pediatric Gastroenterology and Nutrition, “Plasma Biomarkers and Fractional Exhaled Nitric Oxide in the Diagnosis of Eosinophilic Esophagitis” reveals the results of four years of research led by the department’s Division of Gastroenterology.

EoE affects patients through a build-up of eosinophil, a white blood cell, in the esophagus, causing inflammation. This may cause difficulty swallowing, nausea, stomach pain, and poor appetite and nutrition. EoE is the primary cause of food impaction.

EoE may occur at any age or in any person, with the majority of cases in white males – children, adolescents, and those under 50. Early diagnosis is important, as those with diagnosed earlier experience fewer symptoms. The prevalence is estimated at .5-1 per 1,000.

Standard practice for diagnosis EoE is an endoscopy, which can pose procedural risks to the patient as well as a high cost. Other less invasive techniques have been evaluated but have not been adopted by current guidelines.

“In an attempt to identify a novel panel of noninvasive markers that could be used to identify and monitor disease activity in EoE, we analyzed previously studied markers with mixed results (AEC, FeNO) and additionally tested plasma amino acids and polyamines in our current study,” wrote the authors.

“Our work started 4 years ago, when we began to search for noninvasive biomarkers based on a metabolomics study of a previous fellow,” said Marc Rhoads, MD, professor of pediatric gastroenterology with McGovern Medical School at UTHealth Houston.  “Altogether, it has actually been three back-to-back projects of fellows in our pediatric gastroenterology training program as we addressed the question of how to diagnose setbacks when new foods are introduced to children with EoE who have dietary restrictions, such as the six-food elimination diet recommended for eosinophilic esophagitis.  The first step was to find a few markers that could tell us when the disease is active – without doing endoscopy under general anesthesia for the child multiple times each year, as is the standard practice.” Rhoads is the study’s corresponding author.

The differences between the plasma amino acids and polyamines in the controls and EoE patients revealed a statistical difference for diagnosis.

“(W)e were able to identify a novel panel of noninvasive markers (beta-alanine (β-ALA), citrulline (CIT), cysteine (CYS) and spermine) that could help diagnose children with EoE. These findings will need further validation in larger studies and should be investigated during longitudinal follow-up,” the authors wrote. Note that the study accuracy, as measured by a receiver operator curve, was just as good when only the amino acids were used, without spermine or FENO.

“We hope that clinicians will start to use the serum amino acids and blood eosinophil count to determine if a child remains in remission or is having a flare-up of EoE, as symptoms can be somewhat unreliable,” Rhoads said. “The nice thing about the serum amino acid levels is that this test can be done in almost any tertiary referral center on a daily basis, so the results should be back within 24 hours. Our test is reliable and straightforward, not requiring new antibodies or reagents.”