Randy Allgood, 65, of Fairhope, Alabama was able to enjoy a home-cooked meal with his family while staying with his daughter following a procedure to place a branch stent to repair a ruptured aortic aneurysm. (Photo courtesy of Randy Allgood)

After he was told there was nothing his local doctor could do for his ruptured aortic aneurysm, Randy Allgood, 65, of Fairhope, Alabama, was sent home on hospice care. But he found a new lease on life, thanks to a unique treatment option provided by a cardiovascular surgeon at The University of Texas Health Science Center at Houston (UTHealth).

Dec. 5, 2020, started out just like any other day for Allgood. He spent it on his tractor cleaning up storm damage leftover by Hurricane Sally on his five-acre property. That night his lower back started hurting. “It had been bothering me for a couple of months so I just wrote it off thinking it was exertion,” he said. “However, the pain kept getting worse, eventually leading to back spasms, and he finally went to the local emergency room.”

Two years earlier, Allgood had been diagnosed with an aortic aneurysm – a dangerous condition where the aorta, the vessel that pumps blood from the heart to the rest of the body, is enlarged. At that time, he was told the aneurysm was “fair, small, and something to watch.” So, when he arrived at the emergency room, he was taken for a CT scan almost immediately. Once the results came back, the emergency physician contacted the local cardiothoracic surgeon.

“He brought my wife, who had been sitting in the parking lot due to COVID-19 restrictions, into the room and closed the door, so I knew we were dealing with something serious,” Allgood said. The surgeon explained that his aneurysm had ruptured and was now leaking into his abdomen and that there was nothing they were equipped to do medically to fix the problem.

Allgood was placed on hospice care and sent home with pain medication. “When I woke up the next morning the doctor called and said, ‘You are supposed to be dead by now,'” he said. The doctor also told Allgood that he had been doing some research and had found doctors at UTHealth in Houston who might be able to help him.

Allgood’s daughter had started doing research and also came across UTHealth. “Both she and the cardiothoracic surgeon were on the phone with doctors and it became apparent they were talking to two doctors in the same group!” Allgood said. One of those doctors was Gustavo Oderich, MD, professor and chief of vascular and endovascular surgery at McGovern Medical School at UTHealth, who sees patients at UT Physicians Cardiothoracic and Vascular Surgery – Texas Medical Center. UT Physicians is the clinical practice of McGovern Medical School. 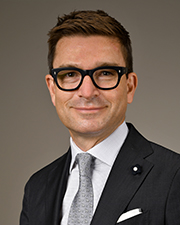 “Dr. Oderich told my daughter, ‘I think we can do something for him if we can get him here – alive,'” Allgood said.

Oderich explained that Allgood’s aneurysm was the most extensive a person could have because it affected not only the chest and the belly, but also the arteries that provide blood supply to the intestines, liver, and kidneys. He also said the risk of a rupture goes up depending on the aneurysm’s size. Those over 8 centimeters – the size of Allgood’s aneurysm – have a 50% chance of rupturing. But given his aneurysm was already ruptured, the chance he would survive without an operation was minimal.

The family packed up for the nine-hour road trip to Houston. “I thought ‘Either I make it or I don’t,’ but the doctors at UTHealth were in contact with us the entire time we were traveling to Houston. They told us exactly where to go and that the team at the emergency room would be waiting for us,” Allgood said.

On Dec. 10, Allgood had a stent replacement procedure at Memorial Hermann – Texas Medical Center, one of two options used to treat aortic aneurysms. The other option is open surgery. The decision to use a less invasive stent procedure for Allgood was based on several factors, including his age, previous medical history, the anatomy of the aneurysm, and the rupture.

“Every aneurysm is different, and the operations to treat them have to be tailored to the patient. This is precision medicine,” Oderich said.

Oderich said the need to match patients to the right kind of treatment for them on a case-by-case basis is one of the reasons why cases like this are so important. “This procedure is cutting-edge. Things like this don’t happen every day,” he said.

Oderich is the director of the Advanced Endovascular Aortic Program at McGovern Medical School and Memorial Hermann – TMC. Oderich brought the program, one of only 10 in the U.S., with him to UTHealth from Mayo Clinic in Rochester, Minnesota, where he previously served as chair of vascular and endovascular surgery.

Making Allgood’s case more challenging was the fact that the specific type of stent he needed is not currently commercially available in the U.S., although it is used widely in many countries such as Canada, across Europe, and in Asia.

“Randy needed what is called a branch stent, where the branches of the aorta that connect the liver, intestines, and kidneys are stented. We applied for and obtained emergency approval from U.S. Food and Drug Administration to receive and place one for him,” Oderich said.

After surgery, Allgood was in the cardiac intensive care unit for about a week before being released from the hospital. He then spent about a week recovering at his daughter’s house in The Woodlands before returning to Alabama after Christmas.

“Every day gets better and I get a little stronger,” Allgood said of the recovery process.

He said that having to deal with something like this in the middle of the COVID-19 pandemic was an interesting experience.

“COVID restrictions made it extra tough. I couldn’t have anyone from my family in the hospital with me and I felt guilty asking for anything since the doctors and nurses were dealing with so much, but everyone I met throughout the whole process was great,” he said.

Oderich is inspired by this story and the opportunity to get more information about aneurysms out to people dealing with them.

“Several patients are out there not knowing there are treatment options, but there are – there is hope,” Oderich said.