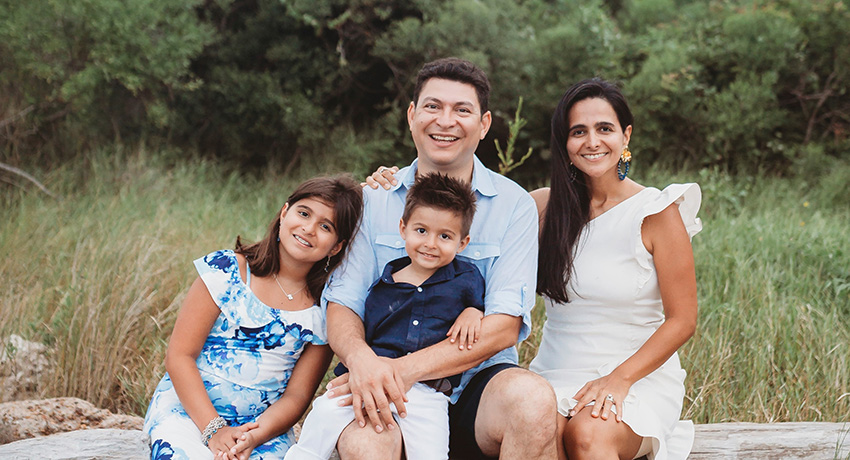 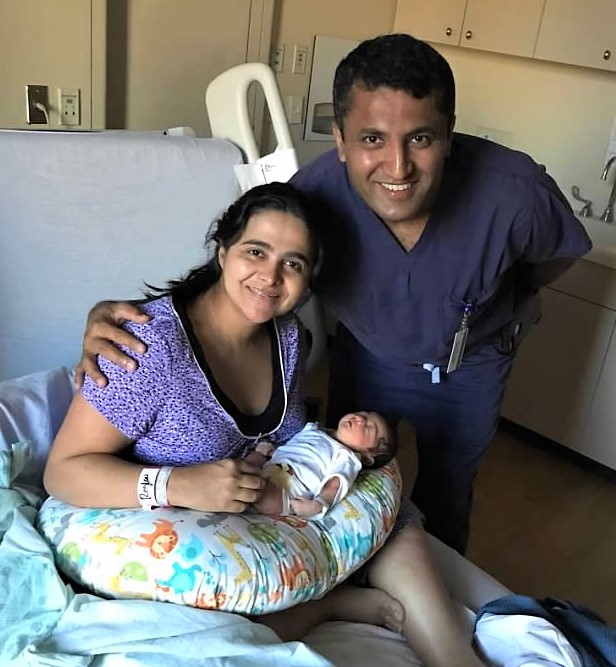 Saavedra with Ramesh Papanna, MD, after the birth of her son, Federico. (Photo credit: Margarita Saavedra)

Baha Sibai, MD, whose expertise in maternal-fetal medicine played a major role in Saavedra being able to have another child after having accreta. (Photo credit: UTHealth)

Margarita Saavedra was 35 years old and 18 weeks pregnant with her second child when she fainted at the doctor’s office after receiving the news that she might need to have a hysterectomy to remove her uterus.

She had been referred to UT Physicians maternal-fetal medicine (MFM) specialist Ramesh Papanna, MD, MPH, for an advanced ultrasound after the technician noticed a brain disorder in the baby during a previous routine ultrasound. UT Physicians is the clinical practice of McGovern Medical School at UTHealth.

Papanna confirmed that her unborn baby did have a deadly brain disorder, in which the brain was protruding out through the weakness in the skull at the back of the neck. And there was another major problem – he also saw that Saavedra had developed a high-risk pregnancy complication called accreta, meaning the placenta attached too far into the uterine lining.

“When they told me I had accreta, I thought, ‘Is that even a word?’ I had never heard of it,” Saavedra said. “They said with the brain disorder, the baby would not make it and the accreta could cause severe bleeding that could kill me in less than 45 minutes. Typically, women with this condition have to have a cesarean section and then a hysterectomy. It was too much – I just fainted.”

Saavedra was at 21 weeks gestation and with all the complications, the only safe option was for Papanna to schedule a C-section. In a routine pregnancy, the placenta detaches from the uterus after delivery, but in women with accreta, it can remain attached and if separated can cause severe blood loss 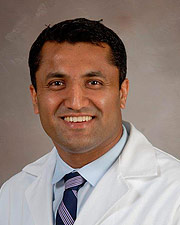 “We knew we had three options after the C-section: get the placenta out and manage the bleeding, take the uterus out, or leave the placenta in place and wait for it to come out naturally,” said Papanna, an associate professor in the Department of Obstetrics, Gynecology and Reproductive Sciences at McGovern Medical School at UTHealth and MFM specialist at The Fetal Center at Children’s Memorial Hermann. “We delivered the baby and it was obvious that the placenta was all the way through the uterine wall, reaching to the surface of the bladder wall. Dr. Sibai, who has nearly 40 years of experience in maternal-fetal medicine and had seen this before, said to leave it intact, so we left everything in place and waited for the placenta to disintegrate and come out.”

Tragically, because of the birth defect, the baby passed away in Saavedra’s arms.

“The doctors told me he may not look human because of his condition, but I didn’t care. I wanted to see him. One of the nurses at Children’s Memorial Hermann covered the back of his head so that I could hold him and that was very sweet. He died in my arms,” Saavedra said tearfully. Children’s Memorial Hermann Hospital is a teaching hospital of McGovern Medical School.

When Sibai and Papanna opted to leave her placenta and uterus in place, they chose a form of treatment called conservative management, where physicians avoid invasive measures like hysterectomy and dissection of tissues in an effort to preserve the uterus and minimize blood loss and the need for blood transfusions.

“This is the first case of successful conservative management for accreta in Houston,” said Baha Sibai, MD, MFM specialist with UT Physicians and The Fetal Center, and a professor with McGovern Medical School. “Conservative management is done more frequently overseas and has two advantages – without the hysterectomy, the procedure is much less invasive with minimal bleeding and the patient gets to keep her uterus. We only offer it to patients we think will be compliant because it requires a hospital stay of 7-10 days, constant monitoring for bleeding, and nearly three months of follow-up.”

“This is a rare success story for a patient with accreta. Conservative management is a novel approach, especially in the U.S., and not everyone is a candidate – the placenta should be not separated and no bleeding to go this route,” Papanna said. 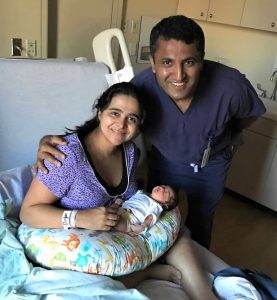 Saavedra with Ramesh Papanna, MD, after the birth of her son, Federico. (Photo courtesy of Margarita Saavedra)

That decision and the close care she received from UTHealth physicians enabled Saavedra to conceive again and deliver a healthy baby boy, Federico, now 3.

Accreta is commonly missed in routine ultrasounds or misdiagnosed, as not everyone has enough experience to spot it, Papanna said. A special 3D power Doppler ultrasound technology, called vascular index, at UT Physicians and The Fetal Center allows doctors to objectively quantify the placenta’s attachment to the uterus, removing the guesswork from the diagnosis. Papanna and several other MFM specialists at UT Physicians have published research on the benefits of the technology.

“With vascular index, we can go beyond just saying we suspect accreta. We can actually predict severity with high degree of confidence. This accurate diagnosis improves our plan for patient management, and also helps us to avoid a negative outcome. Going full-term with a suspected case could result in severe blood loss and hysterectomy, but knowing specifics early on helped us to avoid that for Saavedra,” Papanna said.

Risk factors for accreta including a prior C-section and/or uterine scarring from previous uterine surgery. Saavedra had a C-section with her first child.

“As the number of C-sections has risen across the country, so has the rate of patients with accreta,” Papanna said.

Other risk factors include a placenta that sits low in the uterus, being over age 35, and having multiple previous children.

Saavedra said she will always be glad to have been the first patient with accreta to try conservative management at UT Physicians and The Fetal Center, and in Houston.

“I just can’t get over the support Dr. Papanna and Dr. Sibai gave me – they made themselves available to me 24/7 to handle any instances of pain or bleeding. Their many years of experience made the birth of my son possible. They are the reason I have my miracle baby,” Saavedra said. “And to top it all off, Dr. Sibai delivered Federico himself – that just meant the world to me, our older daughter, and my husband.”

“The data from Europe shows that a woman who has accreta in a previous pregnancy and does conservative management has about a 30% chance of having a successful pregnancy afterward,” Sibai said. “I wanted to deliver the baby to make sure the placenta and everything looked good. For me, this is the most satisfying thing about my career: To give Margarita a chance to have another baby and spare her the hysterectomy highlights why I do what I do. I hope this approach will become more mainstream in the U.S. More women and physicians need to know that it is an option.”

To make an appointment with OB-GYNs or maternal-fetal medicine specialists at UT Physicians, call 488-4UT-DOCS or download the UT Physicians app.