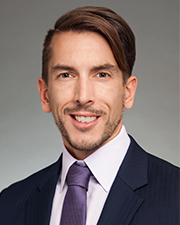 Albert J. Fenoy, MD, is a board-certified neurosurgeon with expertise in deep brain stimulation for movement disorders such as Parkinson’s disease, tremor and dystonia, and psychiatric diseases such as obsessive-compulsive disorder and depression. He also specializes in neuromodulation procedures for chronic pain, as well as surgery for neck and back degenerative disease, including minimally invasive techniques.

Dr. Fenoy is a member of Alpha Omega Alpha, the Congress of Neurological Surgeons and the American Academy of Neurological Surgeons. Also holding a faculty appointment in the Department of Psychiatry and Behavioral Sciences, Dr. Fenoy has been critical in developing at McGovern Medical School at UTHealth an FDA-approved clinical trial on the use of deep brain stimulation in treatment-resistant depression.

Dr. Fenoy has presented research at several national and international conferences that has subsequently been published in Clinical Neurosurgery, Journal of Neurosurgery, Brain Research, Neuromodulation, Stereotactic and Functional Neurosurgery, and Journal of Affective Disorders. His research has focused on the use of diffusion tensor imaging and optimization strategies for targeting in deep brain stimulation, on the electrophysiology of the basal ganglia and response to neuromodulation, and on biomarkers of response to neuromodulation therapy in treatment-resistant depression.