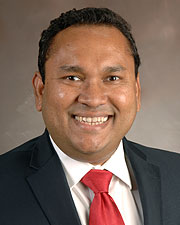 Board Certification:
American Board of Internal Medicine
General
Cardiovascular Disease

Fellowship
Hospital of the University of Pennsylvania, 2015

Fellowship
Hospital of the University of Pennsylvania, 2016

Rasi Wickramasinghe, M.D., Ph.D., better known to his patients simply as “Dr Rasi,” received his undergraduate degree from Stanford University where he was a President’s Scholar and the recipient of the Firestone Medal.

After graduating from Stanford, he was accepted into the medical scientist training program at Johns Hopkins University School of Medicine where he spent the next seven years on his doctoral degrees. During this time, Dr. Wickramasinghe became fascinated by cardiovascular disease.

“During medical school, I got to see a lot of patients with heart disease, and I was so amazed that one of the most easily reversible diseases also happened to be one of the greatest killers in America,” he explained. He was particularly interested in understanding genetic differences across ethnic groups that increase susceptibility to heart disease in a condition called metabolic syndrome, and the profound influence specific dietary habits and exercise has on reducing these risk factors.

After finishing medical school, Dr. Wickramasinghe decided to stay at Johns Hopkins Hospital to complete his internship and residency training in the Osler Medical Service. After residency, he moved to Philadelphia to complete advanced fellowships in cardiovascular disease, interventional cardiology and structural heart disease at the Hospital of the University of Pennsylvania.

During this time, he developed expertise in numerous subspecialties of cardiology.  He is not only an expert in preventing heart disease with simple lifestyle modification, but he also specializes in the management of heart disease with medications, minimally invasive treatment of coronary artery disease, techniques to replace heart valves without the use of surgery (known as transcatheter valve replacement). He is also skilled in the management of diseases of the arteries and veins in the lower extremities (peripheral vascular disease), including placement of stents and “unclogging” blocked leg blood vessels.

In addition to enjoying being a cardiologist, Dr. Wickramasinghe enjoys being an educator and a researcher as an assistant professor at McGovern Medical School at UTHealth. “I believe it is a true privilege to be able to be at a place like UTHealth where I can not only take care of patients, but be at the forefront discovering new knowledge and also help educate the next generation of doctors.” He is a member of the translational research group at UTHealth and is involved in establishing a biorepository where he plans to analyze blood and tissue samples to discover how to predict heart disease before a heart attack.

Dr. Wickramasinghe is an elected fellow of the American College of Cardiology.

He has authored and published over 30 peer reviewed journal articles, abstracts, book chapters and presented at numerous conferences around the world.

Originally a native of Sri Lanka, Dr Wickramasinghe lives in Sugar Land with his wife and two children.

In his spare time, he enjoys photography, filmmaking and traveling.