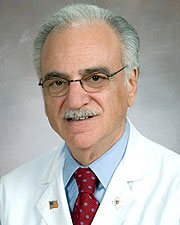 Board Certification:
American Board of Psychiatry and Neurology

Raymond A. Martin, M.D., F.A.A.N., is a fellowship-trained and board-certified neurologist with broad expertise in general neurology and specialty interests in diagnostic neurology, multiple sclerosis, stroke and neuromuscular diseases.

Dr. Martin was awarded his medical degree at the State University of New York at Buffalo and completed his internship training in surgery at Roosevelt Hospital/Columbia in New York City.

Following his residency and fellowship, he completed a National Institutes of Health postdoctoral research fellowship in immunology under the direction of Thomas B. Tomasi, M.D., Ph.D., of the Mayo Clinic.

Before joining the Department of Neurology at The University of Texas Medical School at Houston and the Mischer Neuroscience Institute in 1995, Dr. Martin was in private practice at Neuro-Diagnostic Associates of Houston. He later joined Houston Neurology Associates, where he practiced from 1980 until 2007.

Dr. Martin has held leadership positions in many medical professional societies and has received numerous awards and honors, including the Dean’s Teaching Excellence Award at the UT Medical School. He has been cited for multiple years in Who’s Who in America, Guide to America’s Top Physicians, Guide to Top Doctors and Texas Monthly Magazine’s Super Doctors. He has been listed among The Best Doctors in America every year since 1996.

His research has been widely published, and he has delivered numerous invited lectureships. He serves on the editorial advisory board of American Family Physician.

Dr. Martin, M.D., F.A.A.N., is currently a professor of neurology at McGovern Medical School at The University of Texas Science Center at Houston (UTHealth).