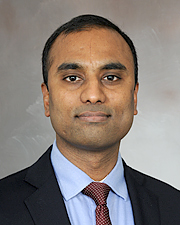 Sudhakar Selvaraj, MD, PhD, is an assistant professor in the Department of Psychiatry and Behavioral Sciences at McGovern Medical School at The University of Texas Health Science Center at Houston (UTHealth).

Dr. Selvaraj is active in several professional organizations including American Society of Clinical Psychopharmacology, Houston Academy of Medicine and more. He has also received several awards and honors throughout his career including the 2016 Dean’s Teaching Excellence Award.