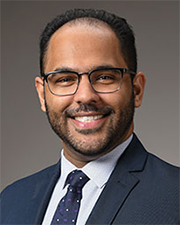 Wafi A. Momin, DO

Board Certification:
American Board of Internal Medicine
Cardiovascular Disease

Wafi A. Momin, DO, an assistant professor at McGovern Medical School at UTHealth, is a first-generation Texan born and raised in the Houston area.

Dr. Momin has traveled across Texas pursuing his career in medicine. He received an undergraduate degree in Finance from the McCombs School of Business at The University of Texas at Austin. He completed medical school at the University of North Texas Health Science Center in Fort Worth. Thereafter, he continued his training at the world-renowned medical center in Houston as an internal medicine resident at McGovern Medical School where he also served as chief resident. He received additional training in cardiology at Baylor Scott & White Medical Center in Temple, TX. He returned to Houston and is now building a robust cardiology practice in the Katy area. In just a short time span with UT Physicians and Memorial Hermann – Katy, he has taken on leadership responsibilities and hopes to do more to contribute to the health and well-being of the community.  He is board certified in internal medicine and cardiovascular disease, and has expertise in echocardiography.

He and his wife have been married for 10 years and have one beautiful daughter. In his spare time, Dr. Momin is an avid sports fan and has followed all major Houston sports teams for many years. He is a foodie, enjoys traveling, and loves spending time with his extended family in Houston.