Reaching Out to the Community with Complimentary Vaccines

For Matt Isenberger, life took a turn two years ago. “I became homeless,” stated Isenberger, 43, matter-of-factly. “It just happened and now it is day-to-day living for me.” 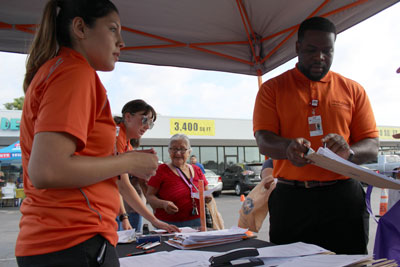 Isenberger was one of 59 people who received the vaccine during the health fair. Typically, the flu season runs October through March. The flu can cause serious illness and even death, especially among older adults, very young children and pregnant women. The Centers for Disease Control and Prevention (CDC) recommends that people receive the vaccine by the end of October.

“Events like these are so important,” said Kimberly Olund, a wellness coordinator with UT Physicians. “We get to help people that would not otherwise be able to have access to flu shots. The best part of my job is being an advocate for health and wellness. We get to help people directly in the community.”

Isenberger explained that he doesn’t get sick a lot, but felt he needed to get vaccinated. “You just never know,” said Isenberger. “I feel since it was offered today, I should go ahead and get it done.”

According to the CDC, this year’s flu vaccine has three components, some with four, to protect you from contracting the virus. If you still get the flu, it should be a milder version if the strain you contract is covered in the vaccine. Everyone over the age of 6 months is encouraged to receive a flu vaccine to protect themselves against this serious disease.