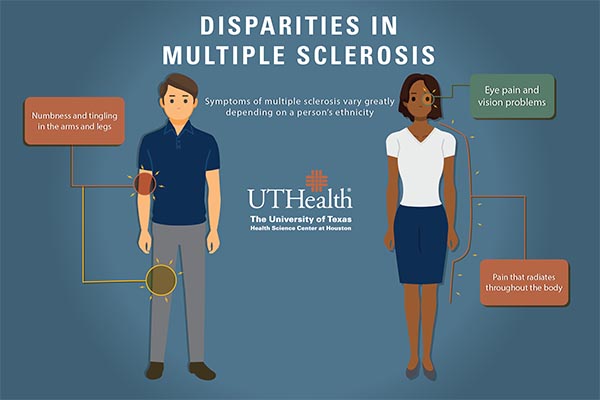 According to a recent study, at the onset of multiple sclerosis symptoms more Blacks and Hispanics have problems that affect their eyes and spinal cord, while whites tend to have more sensory symptoms. (Graphic by Rogelio Castro/UTHealth)

Black and Hispanic patients develop more disability from multiple sclerosis (MS) and respond to treatments for the disease differently compared to white patients who also have the disease, according to recent findings presented by researchers at The University of Texas Health Science Center at Houston (UTHealth) at the Americas Committee for Treatment and Research in Multiple Sclerosis Forum 2021.

The study compared three equal groups of Black, white, and Hispanic patients totaling 150. The subjects were matched across groups by gender and age from 18 to 65. The female-to-male ratio was 3-to-1, mimicking the prevalence of MS in the general population.

“The biggest difference is in clinical presentation,” said Carlos A. Pérez, MD, a multiple sclerosis and neurology fellow with McGovern Medical School at UTHealth who presented the findings. “At the onset of symptoms, more Blacks and Hispanics tend to have problems that affect their eyes and spinal cord while whites tend to have more sensory symptoms such as numbness and tingling in the limbs.”

MS is an unpredictable disease of the nervous system, according to the National Institutes of Health, that disrupts the communication between the brain and other parts of the body. Available treatments include oral medications, injections, and infusions.

“Typically, when we treat a patient with MS, we may start therapy with an injectable medication. If needed, we can escalate to oral medicines and finally to infusions. In our study, 38% of patients required escalation of therapy as a result of accumulating disability, and among them, 63% were Black,” Pérez said.

In addition to treatments being less frequently effective among Blacks and Hispanics, minority groups also reported more side effects to treatment. Overall, 30% of all patients had adverse events that required switching to a different medication, and of those patients, 47% were Black.

Pérez said that this study suggested that initiation of more aggressive therapy at the outset of the disease benefited Black patients in particular, which has allowed him and his colleagues to change their approach to treatment initiation based on race and ethnicity in clinical practice.

“We have found through our study that starting treatments with infusions in Black patients led to less disability in the long run,” Pérez said. “Our primary goal as doctors is to figure out which therapies work for our patients, and if we know how race and ethnicity may impact their response to therapy, we will be able to provide them with the best treatment option.”

More research will be needed to further investigate the genetic differences among patients that might make them more or less susceptible to treatments, he said.

Pérez believes that increasing minority representation in clinical trials will help researchers further explore the influence of race and ethnicity on clinical disease expression in MS. “The racial makeup of MS clinical trials has consistently remained below 10% for minority groups since the 1990s, and current management guidelines are largely based on these studies,” he said. “More studies like ours can provide additional data to help refine current standard-of-care practices and improve health outcomes in minority groups.”