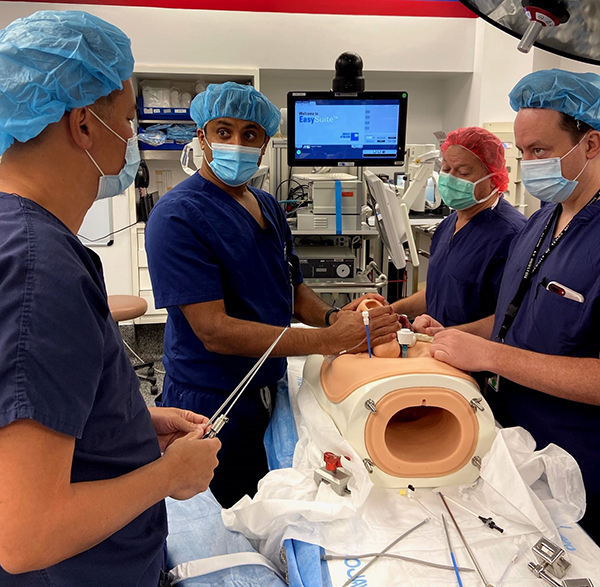 Researchers are investigating whether a human umbilical cord patch placed on the spina bifida defect could improve healing after minimally invasive fetoscopic surgery in a clinical trial at The University of Texas Health Science Center at Houston (UTHealth).

Patients are being enrolled at The Fetal Center at Children’s Memorial Hermann Hospital and UT Physicians.

The study is for pregnant patients whose babies have a neural tube defect, myelomeningocele, in which a sac of fluid containing the spinal cord and nerves protrudes through an opening in the baby’s back. The condition can cause severe and lifelong disabilities, such as difficulty walking and going to the bathroom.

“We’ve used umbilical cord patches before to close the skin when the gap was too large, but now we’re assessing whether we can use this regenerative patch to promote healing and overcome the shortcomings of the minimally invasive approach, including scar formation at the repair site, which causes further complications,” said Ramesha Papanna, MD, MPH, associate professor in the Department of Obstetrics, Gynecology and Reproductive Sciences with McGovern Medical School at UTHealth and maternal-fetal medicine specialist at UT Physicians.

Fetoscopic spina bifida repair is an investigational procedure where surgeons operate on the fetus through a minimally invasive approach. Guided by ultrasound, physicians make three small holes in the uterus, about 3-4 mm each, for insertion of a small camera and surgical instruments to close the defect.

“This approach, compared to open fetal surgery where we have to make a bigger incision on the uterus, allows the mother the chance to have a vaginal birth and avoid another surgery. It also reduces the chances of uterine rupture in future pregnancies,” Papanna said. “However, fetoscopic repair doesn’t allow as much dexterity of the hand, making it more difficult to achieve a watertight closure of the spinal bifida.”

“We’re investigating if the patch can prevent tethering – the attachment of the spinal cord to scar tissue from surgery,” Papanna said. “All babies who undergo in utero repair have tethering, and a third of those children need surgery for the tethered cord by the time they are 10. Sometimes they need two to three surgeries to release the tethering, and with each surgery they can lose functions like walking, bladder control, and mobility.”

Lovepreet Mann, MBBS, sparked the idea for the umbilical cord patch because of its anti-scarring, anti-inflammatory, and regenerative properties. Additionally, in preclinical studies it showed evidence of meningeal regeneration – the three layers of tissue that cover and protect the brain and spinal cord – which led to thinking of using it as a meningeal patch.

“Ramesha is my better half, and we were at the aquarium about 10 years ago and we saw a child in a wheelchair who had spina bifida,” said Mann, who is an assistant professor with McGovern Medical School. “He explained to me that even though surgery is done to repair the defect in the spinal cord, more than half of the babies don’t see benefit for many reasons, one being ongoing inflammation at the site of repair. I used to work in a burns ward and amniotic membrane has been used to reduce scarring in burn patients. So Ramesha and I started exploring this possibility for spina bifida patients.”

They found that amniotic membrane was too thin, but Papanna thought the human umbilical cord, which has very similar properties, might be thicker and tougher.

“The human umbilical cord patch is approved by the U.S. Food and Drug Administration for ophthalmological diseases and has an active component that demonstrates anti-inflammatory and anti-scarring properties,” Papanna said. “It decreases bad inflammation and improves good inflammation, which helps with regeneration. It allows the local tissue to grow instead of a scar formation. Our preclinical studies have shown the umbilical cord patch to be effective in watertight closure, reducing scarring and regenerating meningeal layers at the repair site,” Papanna said.

“Before assessing the patch, we were happy with the outcomes of our in utero surgeries but never completely satisfied with the results,” said KuoJen Tsao, MD, The Children’s Fund, Inc. Distinguished Professor in Pediatric Surgery at McGovern Medical School and co-director of The Fetal Center. “We follow every one of our kids, and we were noticing many instances of spinal cord tethering. We knew we needed an alternative to the current technique and patches used for these operations.”

“As a parent you look for best options for kids, you never settle for less. Physicians have been doing fetoscopic spina bifida repair because of the benefits to the mother, which is important. But we wanted to take this to the next level to make fetoscopic spina bifida repair the best possible option for both the baby and the mother. We needed a better prospect than the current approach,” Mann said.

Papanna, Tsao, and pediatric neurosurgeon Stephen Fletcher, DO, an associate professor with McGovern Medical School, have spent many hours practicing the surgery on a maternal abdominal model, so they know they can achieve the optimal outcome during the procedure.

“We wanted to perfect our technique and teamwork of working together to make sure everything goes smoothly. Kind of like a pit crew – everyone does their part to do the repair as quickly and efficiently as possible, well-orchestrated,” Tsao said.

The Phase I clinical trial will enroll 15 patients and success will be measured by intact repair of the defect, prevention of cerebral spinal fluid leakage, and how well the wound stays closed at birth. The study will also follow the children until 5 years of age to assess functional outcomes.

For more information about the study, visit clinicaltrials.gov.