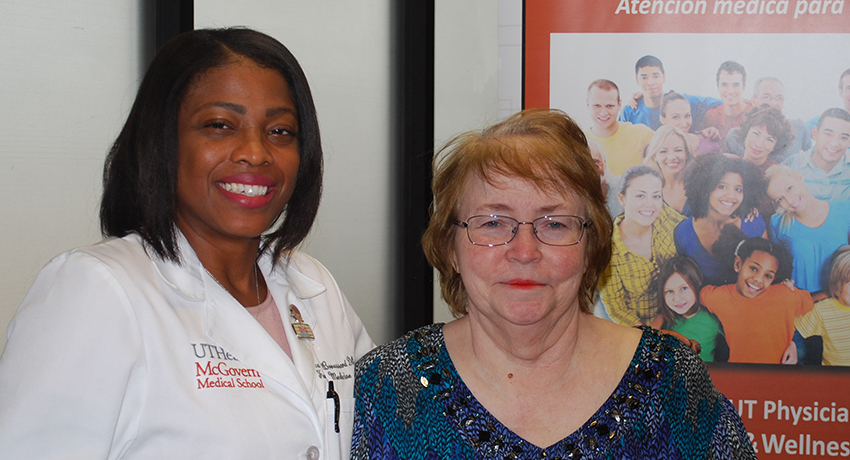 No one has to tell Barbara Ables, 68, of Rosenberg, how important it is for women to get a regular mammogram.

During a routine well visit at the new UT Physicians Multispecialty  – Rosenberg, Ables was scheduled for a mammogram and the retired engineering technical aide is glad she was.

Her radiologist discovered a suspicious mass and an ultrasound-guided needle biopsy confirmed a diagnosis of cancer. Thanks to the early detection of the tumor, her family practitioner Johneca Broussard, D.O., is hopeful that Ables will be cancer free following treatment.

The mammogram was one of several tests ordered by Broussard during the Aug. 15 well visit.

“Our job as primary care providers is to offer appropriate age preventative tests to our patients,” said Dr. Broussard, who is the site medical director for the Rosenberg clinic. “I’m glad we had the opportunity to help Ms. Ables and we hope to help others in this community as well.”

Ables’ case is one of many that will be caught this year by early detection. Hongying “Heather” He, M.D., radiologist and breast cancer imaging specialist at UTHealth, said women shouldn’t be fearful or nervous to have a mammogram.

“It is necessary for early detection of breast cancer,” said Dr. He. “We will work with you to make sure it is as comfortable as possible. The staff will explain the entire process.”

The journey toward getting regular mammograms begins with the establishment of a relationship between teenage girls and their primary care providers, said Elizabeth Clark, M.D., obstetrician and gynecologist with UT Physicians.

“Young ladies should begin seeing health care providers between the ages of 13 and 15 to address any concerns and questions they may have about their bodies,” said Clark, who sees patients at UT Physicians Greens Clinic. “Once they turn 20, they need to begin having clinical breast exams.”

Clark also stressed the importance of self-awareness. According to her, it is very important to know how your breasts look and normally feel. “Many women will detect something suspicious on their own. We need to be proactive about our health care and knowing our bodies,” she said.

“I think women build it up in our minds that we don’t want to go in for a wellness exam,” Clark added. “We think it is too uncomfortable. Women also tend to put other people in the family above themselves. We need to remember that we can’t take care of anyone else if we don’t take care of ourselves.”

Clark understands the importance of these checks. “My mom was diagnosed with gynecological cancer when I was in college. I was inspired by her doctors and became passionate about women’s healthcare.”

In the United States, approximately one of every eight women will develop breast cancer during the course of her lifetime, reports breastcancer.org.

“I’m sold on mammograms,” said Ables. “I think all women should get them.”

Ables was one of the first patients. “This is extremely convenient for me. I can be here in 15 minutes,” she said.