Carolyn Naman is grateful to Ron J. Karni, MD and his team for locating and removing her parathyroid tumor. (Photo by Amanda Patterson)

Tumor. A small word that elicits big feelings. Carolyn Naman’s world turned upside down when her doctor explained one of her parathyroids had developed a benign tumor and would need to be removed. That marked the beginning of a long journey. One she did not anticipate.

A parathyroid is a gland (or glands) near the thyroid that regulates the calcium level in a person’s body.
Naman felt fine. She was symptom-free and unprepared for her diagnosis. The only indicator she had a tumor was elevated calcium levels. The first step would be a referral to an ENT surgeon to discuss the process of removal.

When the surgery was completed, Naman awoke to find out that the parathyroid removed was not the one affected by the tumor. In certain circumstances, parathyroid glands aren’t found in their usual spot near the thyroid and can range in size, sometimes making it difficult to locate a particular one.

Naman began her research for a new physician, determined to find someone who she felt could help her.

It was then that she came across Ron J. Karni, MD, ENT specialist with UT Physicians and associate professor in the Department of Otorhinolaryngology – Head and Neck Surgery at McGovern Medical School at UTHealth. “I went online and did some research myself and I saw a video of him. Just hearing him talk, it made me feel really confident that he would be the one to help me,” said Naman. 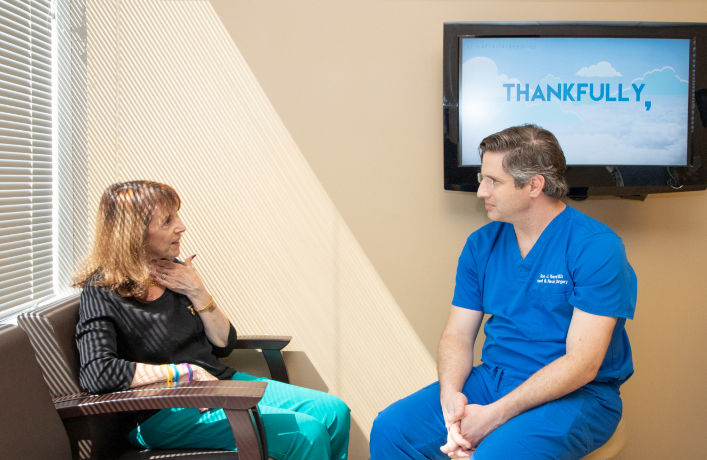 Ron J. Karni, MD, and Carolyn Naman recount her tumor removal and the difficulties caused by a prior failed surgery. (Photo by Amanda Patterson)

Naman set up a consultation with Karni to review her options. During that meeting, she felt the same as when she watched his videos online – confident.

That day, she followed that gut feeling and put her faith in Karni and his abilities. A second surgery was immediately scheduled.

“In Carolyn’s situation, because she’s had a previous surgery that was not successful, our collaboration with radiologists and nuclear medicine doctors are extremely important to identify anatomically where things are,” said Karni. “Operating on someone who previously underwent surgery is more difficult because you are working around a field of potential scar tissue, where things are not normal.”

Another tricky part of removing Naman’s tumor was its location. Karni was cognizant that the nerves near it controlled her voice box. At this point, the tumor was sizable and deep, wedging itself behind her esophagus.

After months of waiting and worrying, the surgery was over in 45 minutes. Once the tumor was removed, Naman’s parathyroid hormone levels were checked to make sure her body was adjusting. 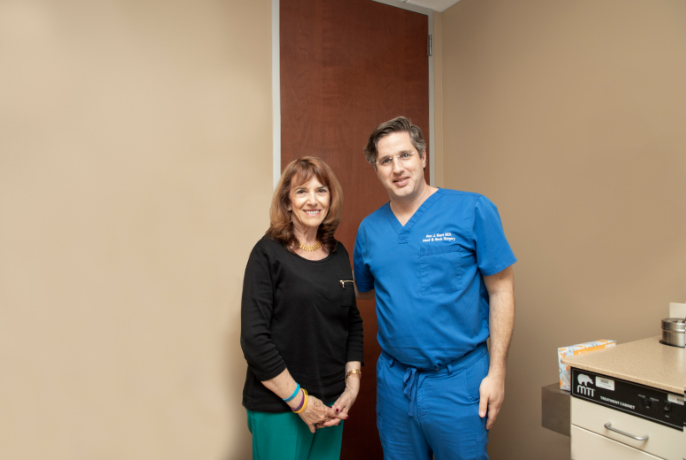 Thankful to Ron J. Karni, MD and his team, Carolyn Naman can now focus on her family and enjoying retirement with her husband. (Photo by Amanda Patterson)

“It felt wonderful to know that it was gone, because of what I went through before,” said Naman.

Karni credits the collaboration between the various disciplines at UT Physicians and Memorial Hermann-Texas Medical Center for the high number of successful revision parathyroid surgeries he has performed. “They are an important group of highly talented medical professionals behind the scenes. Our team will routinely go down to the radiology suite and we spend time reviewing the most complex cases to find these small tumors so we can remove them. I’m basically asking them to help me find a needle in a haystack.”

With two remaining healthy parathyroids, Naman was able to walk out of the hospital the next afternoon. Forever grateful to Karni and the behind-the-scenes team, she’s back to her usual healthy self and enjoying time with her family.