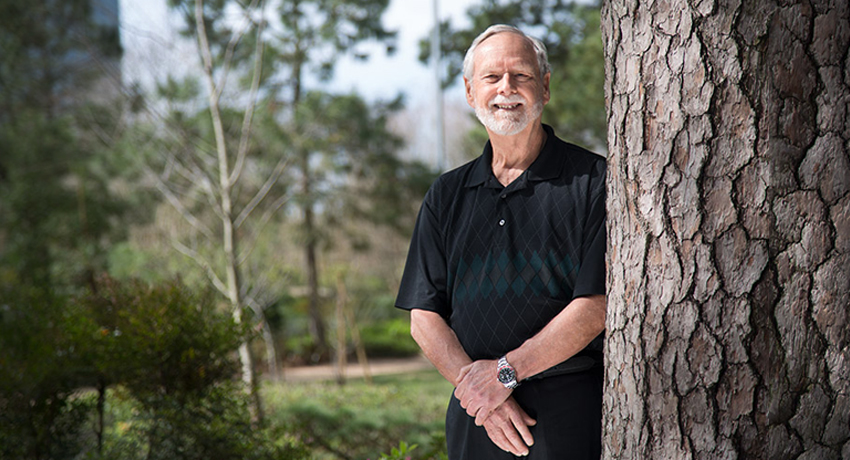 When Andy Danielson walked into the office of Amit Agarwal, M.D., a UT Physicians Colon and Rectal surgeon, he had stage IV colon cancer. Danielson’s chances at survival were slim at best. Twelve months later, Danielson would walk into that same office, but this time, he would learn he was cancer free.

“He is a walking miracle,” says Dr. Agarwal, assistant professor of surgery at McGovern Medical School at The University of Texas Health Science Center at Houston (UTHealth). “Stage IV colon cancer to disease free in 12 months!”

Danielson’s cardiologist referred him to Dr. Agarwal after blood work and a colonoscopy indicated he had cancer in the right side of his colon, which is the part of the bowel where the small intestine and the large intestine meet.

“My cardiologist took a blood test, and it was based on the iron in my blood,” Danielson says. “It said I was losing blood, and he looked at me and said, ‘I believe you have cancer. You need a colonoscopy.’”

His cardiologist ordered the colonoscopy, which Danielson had that same day.

Danielson’s wife, Pat, recalls the symptoms her husband had leading up to his cancer diagnosis, which were shortness of breath, difficulty getting around and fatigue.

“The symptoms he had are also signs of colon cancer… anemia leading to fatigue and shortness of breath,” Dr. Agarwal explains, adding that some can have abdominal pain or the inability to pass gas or have bowel movements if the cancer is large enough.

Further tests from Dr. Agarwal revealed an even grimmer prognosis for Danielson, who was 74 years old at the time.

Computed tomography (CT) scans of Danielson’s chest, abdomen and pelvis showed the colon cancer had spread to his liver, and he had blood clots in his lungs.

“When people have cancer, they are at increased risk of blood clots in the legs, brain, heart or lungs,” Dr. Agarwal says. “I do believe his blood clots in his lungs were due to his colon cancer.”

Finding out you have colon cancer, metastatic liver disease and blood clots in your lungs can be a lot for one person to deal with. Danielson says he didn’t accept the diagnosis, not because he was in denial but because he was determined.

“I’m also an ex-Marine, Vietnam veteran, and I’m very stubborn,” Danielson says. “I didn’t accept the diagnosis. I wanted to go on and see what was the next to-do.”

Pat laughs and says “stubborn” should be in all capital letters. She adds, however, that her husband was optimistic from the onset.

“He has always been positive,” she says. “He never projected any gloom and doom. He was always, ‘OK, I’ll do what they ask me to do. I will try everything I can and be a good patient,’ and he was.”

Because Danielson was at an advanced stage of colon cancer with liver metastasis and blood clots in his lungs, he wasn’t a good candidate for surgery right away.

“Since he had stage IV colon cancer, I advised him to get chemotherapy before any surgery,” Dr. Agarwal says. “I was hopeful that he would have a good response to therapy, his primary tumor would shrink and his liver metastasis would either shrink or resolve.”

Danielson says he had nine chemotherapy treatments over six months and at times suffered some significant side effects.

In the midst of this, he also had to treat the blood clots in his lungs – two shots/day in his stomach for six months.

After six months of chemotherapy treatments, Danielson had good results. His oncologist gave him the green light for surgery, after scans showed shrinkage of the tumors in his colon and liver.

“His liver lesions were gone,” Dr. Agarwal adds. “I expected them to shrink but not to be undetectable on imaging. You just don’t see that very often.”

Danielson was back to see Dr. Agarwal for the surgery. “I removed his right colon laparoscopically and found that he had a significant response to chemotherapy,” he says. “All lymph nodes were negative.”

Danielson’s surgery was done a week or two prior to Hurricane Harvey. He says he was supposed to get his results the week after the hurricane, but everything shut down.

When he finally got the results, both he and Dr. Agarwal were elated.

“He had this big smile on his face, and he said, ‘I’ve never seen a pathology report this good,’” Danielson says, referring to Dr. Agarwal. ‘It’s clear. We got everything out of the colon.’ There was no invasion into the walls of the colon. He took out 14 lymph nodes, and none were cancerous.

“Dr. Agarwal told me I should be the poster child for colon cancer,” Danielson continues.

While Danielson is a success story for overcoming stage IV colon cancer, that’s not always the case. Dr. Agarwal recommends early detection via a screening colonoscopy starting at age 50. For African-Americans, screening tests should start at 45.

“It’s the number one preventable cancer,” he says. “If you have persistent rectal bleeding, unintentional weight loss over a one to two month period, family history of colon cancer, get a colonoscopy early. See your primary care doctor for routine blood work and physical exams at least once a year.”

Dr. Agarwal says other common symptoms of colon cancer include persistent abdominal pain and feelings of incomplete evacuation. “You always feel like you need to have a bowel movement, but nothing comes out,” he explains.

March is Colorectal Cancer Awareness Month – a time to educate ourselves and those around us about the importance of colorectal cancer screening. The first step is to know the risks of colon cancer and how to reduce those risks through regular screening tests.

Danielson says he “definitely would recommend Dr. Agarwal because he is updated on all the new procedures,” he says. “His demeanor or his bedside manner is excellent. You can talk to him personally and he understands. He listens to you. He ends up sort of being a friend, and you feel like he’s part of the family.”

Danielson had a check-up and colonoscopy in January 2018.

“I re-evaluated his colon last week via colonoscopy and found no recurrent disease,” Dr. Agarwal says. “I knew he had a chance to overcome this, but it was slim. He has always been a fighter, and it showed in this instance.”