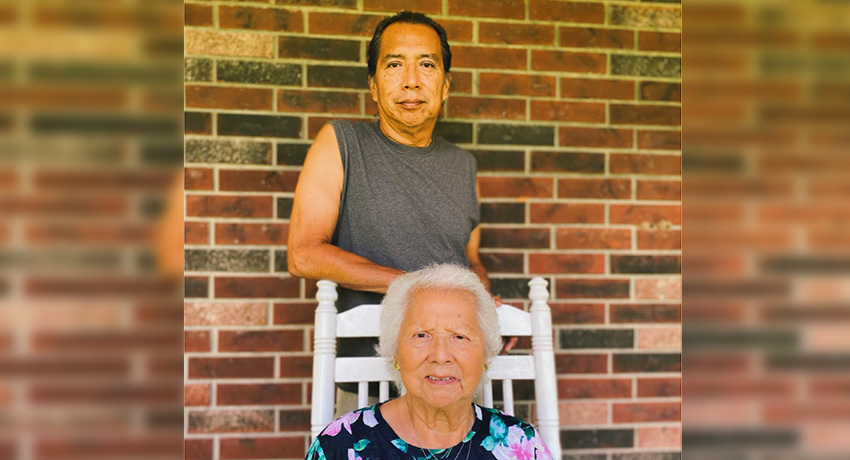 Burnett Langley with his mother, Monnie. (Photo provided by patient)

In late March 2021, Burnett Langley, 57, was recovering from a recent hospital stay due to complications from diabetes.

After noticing fluid retention, particularly in his legs and lungs, he visited his primary physician for routine testing. What they discovered was alarming — his oxygen level had dipped to just 65% — at least 30% lower than normal.

Langley was rushed immediately to Memorial Hermann-Texas Medical Center. There, they pumped fluid from his lungs and ran additional diagnostic tests, which showed multiple major blockages in his heart.

“Langley had a positive stress test and a history of high blood pressure and heart failure,” Eisenberg recalled. “After a cardiac catheterization, we found that he had multi-vessel coronary artery disease. Right away, we put him on blood thinners and scheduled him for surgery.”

The coronary artery provides the heart with essential blood flow to pump blood throughout the rest of the body. When this artery becomes blocked, or partially blocked, the heart is unable to function properly.

“From the very beginning, Dr. Eisenberg and the hospital staff explained to me exactly what was going to happen with the procedure, from pre-op to recovery,” Langley remembered. “I felt very informed. Nothing that happened was unexpected.”

In all, he was in the hospital for less than two weeks.

“I have a little numbness at the incision points, but that’s about it,” he said. “I’m up to 50 minutes on the treadmill and combo bike [which works both your arms and legs] — the maximum time they allow.”

In an odd twist of fate, Langley discovered after his surgery that Eisenberg, awarded both the John P. McGovern Award and the Dean’s Excellence in Teaching Award in 2020, performed the same procedure on his mother, Monnie, exactly 10 years earlier.

While notable, the circumstance is not rare. Inherited cardiac conditions (ICC), in which heart conditions have been passed on through a parent’s genes, cover a wide range of diseases. ICCs are generally caused by a mutation in one or more genes. If a parent has a faulty one, there’s about a 50-50 chance it will be passed on to their children.

“I knew Burnett was having the same procedure as me, but it was quite a surprise when I found out the same doctor was doing it,” said Monnie, 84. “I was confident he was in good hands because Dr. Eisenberg and the staff took really good care of me. We are very blessed and thankful for him.”