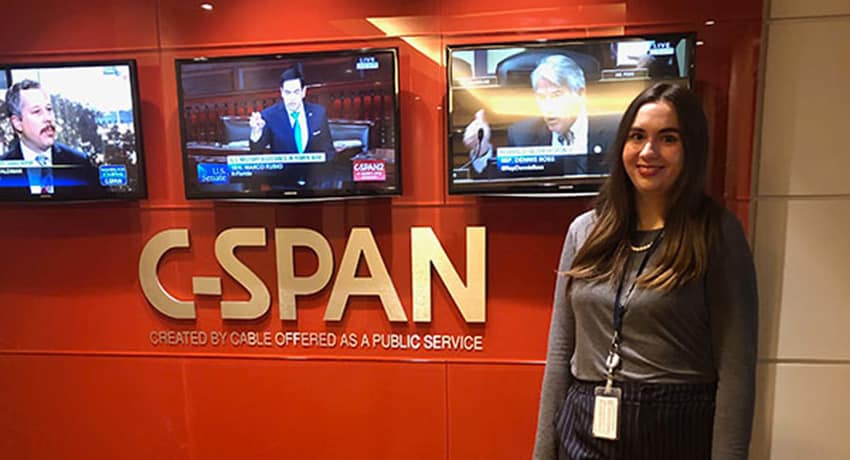 Diagnosed with Landua-Kleffner-Syndrome at a young age, Caroline Love briefly lost her ability to speak or hear. (Photo courtesy of Caroline Love)

Twenty-four-year-old Caroline Love of Sugar Land, Texas, sits in front of the microphone as the “On Air” sign lights up and she begins to speak – which for someone who at one time couldn’t speak or hear is something of a miracle.

“Ever since someone from National Public Radio’s Code Switch podcast spoke to my journalism class my freshman year at Texas Christian University, I’ve wanted to work for NPR,” Caroline said.

A rare neurological condition nearly stopped that dream before it ever started. But Caroline’s mom, Mary, found someone at The University of Texas Health Science Center at Houston (UTHealth) who could make sure Caroline’s future dreams could still one day be realized.

Around the age of 4, Caroline started to develop subtle problems with her hearing. “She was not consistently responding to her name and she didn’t notice when a family member entered the room,” Mary said.

Caroline Love at her fifth birthday. At this time she could not speak or hear due to her LKS. (Photo courtesy of Caroline Love)

Mary took Caroline to several doctors including her pediatrician, an otolaryngologist, a speech therapist, and an audiologist, but none were able to provide an explanation for Caroline’s sudden inability to communicate.

“When I started to lose my ability to speak and hear, it was as if the volume on the world was slowly being turned down until it was silent,” Caroline said.

After nine months of worsening symptoms, in 2001 a neurologist performed a sleep-deprived electroencephalogram and made a tentative diagnosis of Landau-Kleffner-Syndrome (LKS), a rare disorder characterized by loss of language comprehension and verbal expression.

Looking for a second opinion, Mary, then working on her master’s degree in nursing at Cizik School of Nursing at UTHealth, was referred by one of her professors to Ian Butler, MD, professor in the department of pediatrics at McGovern Medical School at UTHealth and a neurologist with UT Physicians. Butler ordered further tests and confirmed the diagnosis of LKS. The tests showed abnormal electrical activity during sleep, disrupting Caroline’s ability to process information entering her brain, including sound.

“Dr. Butler informed us that most children with this diagnosis do not fully recover their language and cognitive functions, and that the next 12 months were crucial for her outcome, Mary said.

Caroline was put on medication to control the abnormal brain waves she was experiencing during sleep but over the next three months her condition deteriorated. “She could not speak or make any sound, and she could not understand spoken words or environmental sounds such as dogs barking or the doorbell ringing,” Mary said. “For all intents and purposes, a month before her fifth birthday, she was deaf and mute.”

Butler decided it was time to try a new course of treatment. “I just had a feeling that we weren’t winning with what had been tried before and we needed to do something out of the box,” he said.

Caroline was started on a steroid which was increased over six weeks to a high daily dose.

At that time, she began to make sounds again – humming to music and making animal sounds while playing – and even regained the ability to say “mama,” Within four months of starting the steroid, she was speaking in brief sentences and her speech was becoming clearer. She continued to be on the steroid medication for another two years, along with doing intensive speech therapy. Weekly speech therapy sessions for another four years helped to continue development of her vocabulary.

Now Caroline is a graduate student at the Medill School of Journalism at Northwestern University pursing a master’s degree in journalism with a social justice investigative specialization. “I became a journalist because I’m passionate about telling stories that empower people who’ve suffered injustices,” she said. “I know what it’s like to live in silence, so I want to break that silence for others.”

Butler thinks that is what is so inspiring about Caroline’s story. “Her deficiency has become her strength,” he said.