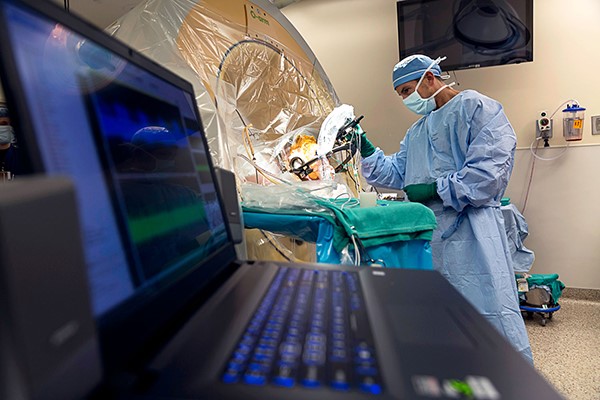 A high-tech imaging study to understand how brain connectivity patterns change after deep brain stimulation in patients suffering from essential tremor has been launched at The University of Texas Health Science Center at Houston (UTHealth).

The clinical trial, led by Albert J. Fenoy, MD, associate professor of neurosurgery with McGovern Medical School at UTHealth, is funded with a $2.1 million grant from the National Institutes of Health (NIH).

“Deep brain stimulation is a very effective treatment strategy to control tremor, but efficacy can wane over time and side effects can develop, likely due to an incomplete understanding of the network effects of chronic stimulation.” said Fenoy, director of the Deep Brain Stimulation Program at UTHealth Neurosciences. “Our goal is to verify what is occurring, which can be elucidated through imaging during stimulation.”

Essential tremor is the most common movement disorder in adults. The exact cause is unknown. The key feature, according to the NIH, is a tremor in both hands and arms, but it also can affect the head and voice. As the disease progresses, it can become extremely disabling.

When medications no longer work, deep brain stimulation can be an option for patients. During the procedure, electrodes are implanted into certain brain areas that can generate electrical impulses to control the abnormal brain activity causing the tremor. Stimulation is controlled by a generator placed in the chest.

Fenoy uses a newer type of technology called tractography, which is based on diffusion magnetic resonance imaging (MRI) to illuminate the dentato-rubro-thalamic tract (DRTt), the target for placing the electrodes. The DRTt originates in the dentate nucleus of the cerebellum and ends in the contralateral ventrolateral nucleus of the thalamus.

“Over time, efficacy wanes due to tremor disease progression, but we have the ability to adjust and/or increase the volume in the brain that is being stimulated so that we may continue to contain tremors,” Fenoy said. “However, sometimes this can cause side effects such as worsening balance, or ataxia, in up to 20% of patients. We believe the stimulation may be modulating something in the cerebellum, but we are not sure. That’s our hypothesis.”

Fenoy said the team will also seek to understand whether the stimulation may be affecting another connection in the brain that can be avoided in the future.

The team will use resting state functional MRI (fMRI) of the patients before and after DBS to see how different cortical and subcortical areas are connected and what changes have occurred.

“If we can see what occurs in the brains of people who no longer get relief from DBS versus those who do, we might be able to identify a biomarker for those patients,” Fenoy said. “If they are at a higher risk of developing ataxia, we want to see if there are things we can do in the future to avoid it.”

The study will recruit 72 new patients who are about to undergo DBS for essential tremor and will follow them for two years.

The clinical trial, Elucidating the Temporality of Structural and Functional Connectivity Changes in Essential Tremor after Successful Deep Brain Stimulation to the Dentato-Rubro-Thalamic Tract, is supported by the National Institute of Neurological Disorders and Stroke (grant #1R01NS113893), part of the NIH.