Anthony Jones gives a "thumbs up" with his surgical team (from left to right) Dominik Rudecki, DDS, Mark Wong, DDS, James Melville, DDS, and John Guenther, DDS with UTHealth School of Dentistry after a life-changing surgery. (Photo by: Roger Castro)

It was enough that Anthony Jones had survived the infection, intubation, and one of those COVID-19 goodbyes that might not see a ‘hello’ on the other side.

But when they turned the Lake City, Florida, resident over after he lay on his stomach for 12 hours a day for three weeks – necessary to heal ailing lungs – a new alarming complication awaited him and his family.

Jones’ tongue was severely swollen – to the point where he was unable to speak or eat. They didn’t know it then, but they would eventually have to travel to another state to find help in the form of an oral surgeon with The University of Texas Health Science Center at Houston (UTHealth).

“They told us that his tongue was swollen and whenever we saw him on FaceTime, it was covered,” said his wife Gail Jones. “Then he called us on his own one day and that was the first time I had seen it and I said, “What happened to your tongue?”

After spending more than a month in the hospital, Anthony had beaten the virus but his tongue was still massively swollen. When the family consulted a specialist, they were finally given a name for his condition: macroglossia.

“The doctor was shaking his head and said he could do surgery, but he couldn’t guarantee that Anthony would ever eat or talk again,” said his mother Mary Ann Jones, as she began to tear up at the memory. “Anthony started crying like was giving up and I said ‘Don’t worry baby, we will find someone to help you.’ The look on his face after the doctor left hurt my heart so bad.” 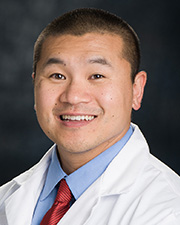 They returned to his parents’ house and while Anthony’s father prayed with him outside by the car, Mary Ann, a retired nurse, was inside Googling “macroglossia.” She almost immediately found a reference to a 2018 case study published in the Journal of Oral Maxillofacial Surgery by James Melville, DDS, an associate professor and oral surgeon at UTHealth School of Dentistry.

“I was checking email before bed and I thought it was junk at first because I get so much of that,” Melville said of the email from Mary Ann. “I asked for a photo because you can’t fabricate that. She sent a picture of Anthony and I told her I could definitely help him.”

The macroglossia was classified as massive. Extremely rare, Anthony’s occurred when the lymph nodes drained fluid into his face and tongue. Melville had performed surgeries in two other cases of such severity and both patients recovered well.

“It is psychologically depressing because they are looking at as an oddity. They have to be on a feeding tube, a permanent tracheostomy for an airway, and there is an infection risk. The tongue completely dries out, so you have to wrap it to keep it moist so it doesn’t crack and bleed,” Melville said. “The surgery takes 45 minutes to change someone’s life. We communicated virtually before he arrived and it was a team effort with everyone at the UT Dentists clinic.” UT Dentists is the faculty practice of the School of Dentistry.

Anthony, Gail, and Mary Ann arrived from Florida within a short period of time. Unable to talk and asked to pose for a photo with the treatment team, Anthony placed his hands together in prayer, communicating more powerfully than words that his future was in the hands of those standing behind him and that his faith would help him through.

Anthony’s wife Gail Jones and mother Mary Ann Jones worked to find the right surgeon and treatment for Anthony Jones. His tongue had to be wrapped daily. (Photo by Rogelio Castro/UTHealth)

Melville performed a partial glossectomy, a wedge resection of the tongue that spares the nerves on the side of the tongue. “It allows for full feeling, full functional speech and close to 100% taste back,” Melville said. “The tongue is 95% muscle so it heals quickly.”

Within a week, Anthony was able to speak and slowly begin to swallow fluids and soft solids. The hole in his throat that allowed him to breathe was closed. And the smile was huge. On Thanksgiving, he ate turkey, dressing, and macaroni and cheese. And just the other night, he had pecan pie.

“I’m just thankful I am able to talk,” said Anthony, with a wide smile.

Through a news story about his journey, yet another patient’s family has reached out to Melville.

“I saw something on the television about someone you helped,” the family member emailed Melville. “You are our only hope.”