Imagine that every time you ate something, you experienced stomach pain and cramping. This was the reality for Naqibullah Laghmanai. After years of being unable to find the cause of his condition or receive successful treatment for symptoms, he finally found relief thanks to the help of Amit K. Agarwal, MD, FACS, a colorectal surgeon with UT Physicians.

Naqibullah Laghmanai serving as translator for the armed forces. (Photo provided by patient)

In 2008, Laghmanai worked as an interpreter for the United States armed forces in Afghanistan. He played a vital role in helping the military identify, translate, and summarize communications. He first started experiencing stomach problems in 2009-10. It occurred regularly, but he did not think it was concerning enough to visit a doctor.

“For as long as I can remember, I’ve always had stomach issues every time I ate something,” said Laghmanai. “I felt that it wasn’t that serious at the time.”

In 2013, Laghmanai was granted a visa and came to call Charlottesville, Virginia, his new home. The big move was a new beginning for him, but his recurring stomach pain continued to haunt his health. An initial diagnosis from a local doctor indicated that his condition was not concerning and Laghmanai was prescribed medication for his symptoms.

Eventually, Laghmanai moved to Houston and continued to see doctors for his stomach pain. The medications did not work, and he was searching for a permanent solution.

“I was losing weight and gradually getting weaker,” said Laghmanai. “I asked about a colonoscopy, but my doctor didn’t think it was needed.”

Laghmanai was frustrated and did not feel his concerns were being considered. In February 2018, through an emergency room visit, a CT scan was performed and it showed a possible mass in his right colon.

Eventually, Laghmanai was diagnosed with familial adenomatous polyposis (FAP), a rare genetic condition where hundreds to thousands of polyps form a mass in the intestinal tract. 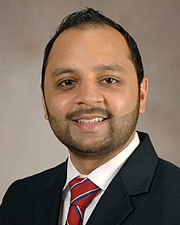 “The diagnosis of FAP is made if you have a numerous amount of polyps growing in your large intestine including your rectum,” said Agarwal, an assistant professor in the Department of Surgery at McGovern Medical School at UTHealth. “The polyps will develop into colon or rectal cancer during the patient’s lifetime.”

Laghmanai met with Agarwal and a few other surgeons to get multiple opinions. They all agreed that the surgical removal of his large intestine was the best course of action. Laghmanai chose Agarwal to perform his surgery based on their interactions together and how well Agarwal explained everything. Laghmanai also noted that he did not feel any pressure to agree to a certain type of treatment.

Another surgery known as an ileostomy was also performed to create a temporary opening (stoma) so his stool was diverted away from the j-pouch to aid in healing. Three months later the stoma was closed, and he started to have bowel movements outside of the pouch.

Naqibullah Laghmanai is thankful to be alive and focused on his health. (Photo credit, Kim Kham, UT Physicians)

The surgery was a success and during Laghmanai’s recovery period, Agarwal kept in touch.

“Dr. Agarwal is a kind and professional person,” said Laghmanai. “He is very responsive and answered all my questions.”

Laghmanai is thankful that he is alive and wholeheartedly appreciates Agarwal’s patience, expertise, recommendations, and follow-up care. He recommends that everyone have a colonoscopy. He doesn’t want anyone to go through a similar experience, and advises that you should not ignore any symptoms.

“As part of his surveillance routine, he visits with an oncologist annually to obtain imaging to make sure he has no other sites of disease

Naqibullah Laghmanai recommends that everyone should get a colonoscopy. He doesn’t want anyone to go through his experience. (Photo provided by patient)

involvement related to FAP,” said Agarwal. “Patients with FAP have a higher likelihood of developing cancers in the pancreas, duodenum, thyroid, and kidneys.”

Laghmanai’s outlook is very positive. He is gaining his weight back and getting stronger every day. Currently, his focus is on his family and maintaining an active, healthy lifestyle.