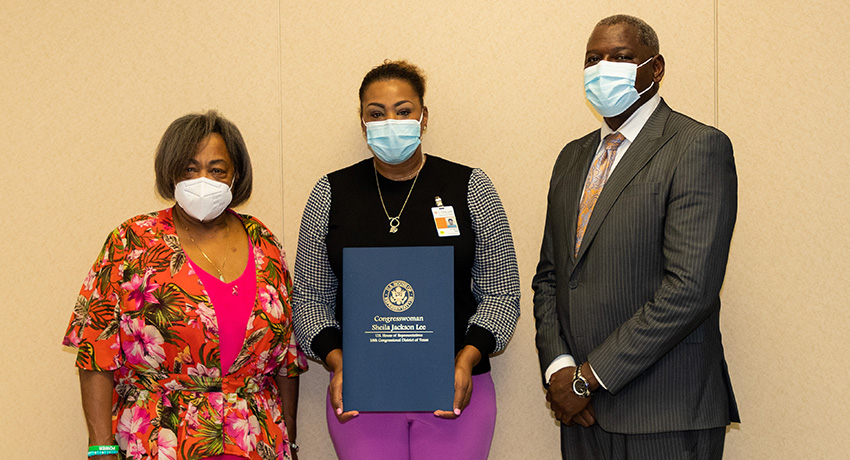 Latanya L. Sam, practice manager of the UT Physicians Multispecialty – Victory clinic, recently received a proclamation from the office of U.S. Rep. Sheila Jackson Lee for her quick thinking that potentially saved the life of a pediatric patient.

Late last year, Sam was concerned about lab results that came back for a patient after hours. The tests revealed that the  patient, a 16-year-old boy, was suffering from a severe heart infection and emergency care would be necessary to prevent an impending heart attack.

Initially, Sam collaborated with nurse triage to notify the family of the dire situation by sending an ambulance to their home.

Unfortunately, her plan was unsuccessful and through miscommunication, the ambulance was sent away. Knowing precious time was being wasted, she assisted the family in reaching the hospital.

“As the manager of the clinic, I really like to make sure the patients are a priority. I knew the family was new to the community. I had to help the family understand how important it was to get to the hospital for care,” she said.

Upon hearing this heartfelt story, Edna Griggs, a volunteer in the office of Rep. Sheila Jackson Lee, felt that Sam should receive recognition to honor her bravery and initiative.

“When I heard what happened, I knew she needed to be recognized,” said Griggs. “She went above and beyond to save a child’s life.”

Griggs shared the story of Sam and the pediatric patient with the representative, who also felt that her heroism should be highlighted with a proclamation.

“It was an honor to present this award on behalf of the congresswoman to someone who truly represents this community,” said Freeman

The patient that was saved almost a year ago is doing much better today. He has continued his care at the UT Physicians Multispecialty – Victory clinic.

While honored by this award, Sam believes that she was just doing what needed to be done.

“The community should know they can count on UT Physicians, even after business hours are done,” she said.