Water jogging gives marathon runner a leg up on recovery 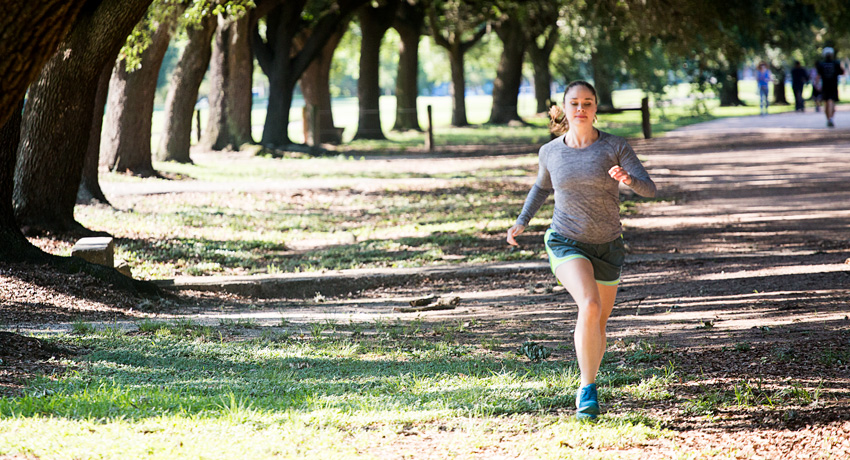 Caliann Ferguson hitting the trails at a local park to train for her next marathon.

Caliann Ferguson was excited to take part in her first full marathon in California. She had completed a few half-marathons and was sticking to a solid training regimen, but her excitement turned to concern when she began to feel pain in her hip.

Ferguson, a marketing coordinator with UT Physicians, turned to one of her own clinics for help last November. She was mid-way in her training cycle when she ran into the issue and wasn’t too far away from the start of the marathon.

“We couldn’t pin down exactly what was causing the pain,” Ferguson says. “Ultimately, they had to do an MRI and they found out it was a stress fracture.”

Juan C. Galloza-Otero, MD, a physical medicine and rehab specialist with a sub-specialty in sports medicine at UT Physicians, said such fractures are common among endurance athletes. Such small cracks in bones can occur in places like the tibia, in the foot, and can be a complication of shin splints.

“Thankfully we caught it fast,” says Dr. Galloza-Otero, who is also an assistant professor at McGovern Medical School at The University of Texas Health Science Center at Houston (UTHealth).

If training for a full marathon wasn’t challenging enough, Ferguson now had to scale back her physical activity to zero. Dr. Galloza-Otero instructed her to avoid any impact activities such as running, spin classes, pilates, and even yoga.

“When you have a stress fracture on the lower extremities, the main way to treat it is to avoid the actual stress that was causing it,” Dr. Galloza-Otero says. “Stress fractures occur slowly, contrary to other acute fractures where you break the bone from a trauma, and they take a while to heal.”

That was troublesome news to hear, particularly because Ferguson wanted to compete in the Surf City Marathon in Huntington Beach, CA, just months away in February. It would take one or two months to fully heal.

“That was a huge shift in my everyday life,” Ferguson says. “To have that taken away was rattling.”

However, Dr. Galloza-Otero understood the need to be active and maintain her cardiovascular endurance to be able to compete in time. He recommended deep water running, a form of aqua therapy designed to take the load off the lower extremities while still allowing for endurance training.

“With deep water running, you put a buoyancy belt on your waist and go to the deepest end of a pool where your feet won’t reach the ground,” Dr. Galloza-Otero says. “The athlete holds a running position and starts doing the running motion for a certain amount of time with their feet in the water with no impact on the legs.”

Dr. Galloza-Otero said athletes can maintain about 90 percent of the same cardiovascular endurance with this training as they continue to heal. Ferguson said she had never heard of deep water running, but within a few weeks she noticed a difference.

“My first thought was about how exactly it was going to help,” Ferguson says. “But if you’re not applying pressure to it it’s going to heal itself.”

How did Ferguson end up doing? She joked she did, in fact, finish.

“Honestly, I just wanted the medal for participation,” Ferguson says with a laugh. 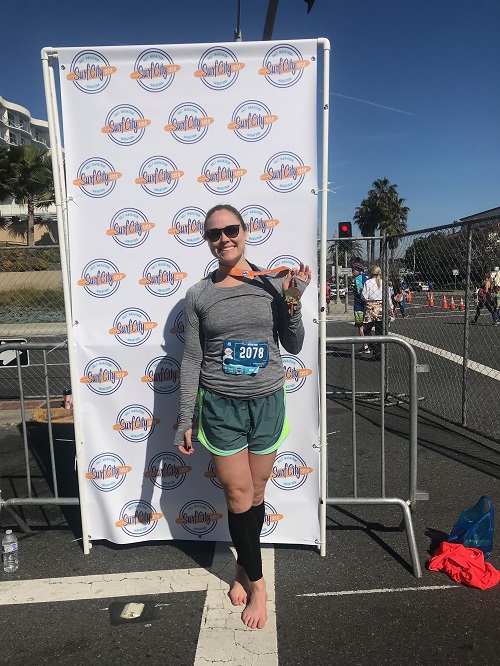 For athletes like Ferguson, Dr. Galloza-Otero said that newcomers or novices training for their first marathons should consult a coach or a trainer to ensure a proper training regimen is in place. Runners should avoid doing too much too soon, as that’s what makes athletes prone to injury. If an injury does happen, deep water running can be useful for any injury of the lower extremities that would be caused by running on the ground.

“Another thing to keep in mind is that it’s not only about running,” Dr. Galloza-Otero says. “You also need to be fit to run. It’s important to do exercises for strengthening core, glutes, legs and improving flexibility.”

Discipline also is key to a fast recovery.

“[Ferguson] was very disciplined during the rehab process and that’s why she achieved success in completing the race,” Dr. Galloza-Otero says.

Ferguson recommends deep water running and the guidance of a trusted physician to athletes aiming to make a healthy comeback from an injury.

“Dr. Galloza-Otero was able to clearly explain what the plan was for recovery,” says Ferguson. “It made me feel comfortable knowing that I would not reinjure myself.”