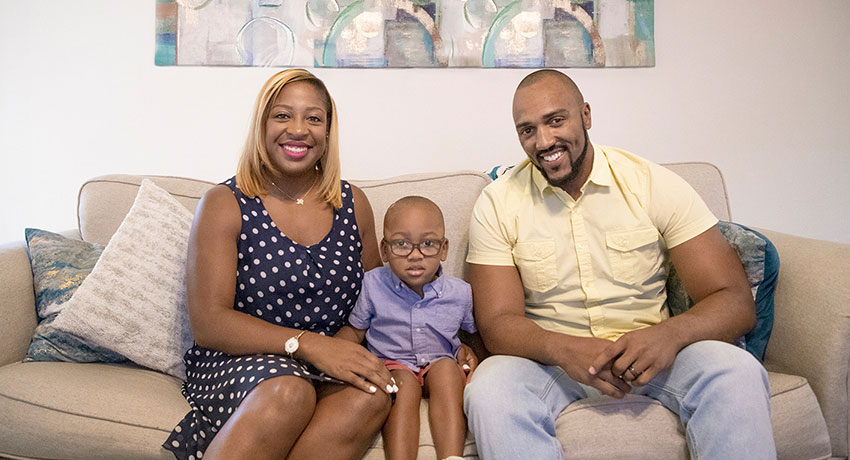 Jasmine and Andre Hicks with their son, Wesley. (Photo by Amanda Patterson)

Still newlyweds, Jasmine and Andre Hicks, couldn’t be more excited to find out they were expecting their first child. However, nothing could prepare them when Jasmine started experiencing symptoms of labor at just 21 weeks.

Jasmine and Andre rushed to the hospital in shock, knowing 21 weeks is extremely early to deliver a child. By the time they arrived, Jasmine’s water had broken and they discovered their baby was breech. Still too early to go into labor, Jasmine was put on bed rest at the hospital for the next 10 weeks. “You never know how strong you are until being strong is your only option,” said Jasmine.

After the 10 weeks, once again, Jasmine was in labor. At that time, the hospital crew determined the best course of action was an emergency C-section. Wesley entered the world Oct. 31, 2015.

Immediately, Wesley was put on breathing assistance. One week after his birth, Wesley was diagnosed with hydrocephalus, and Jasmine and Andre were referred to Manish N. Shah, MD, a pediatric neurosurgeon with UT Physicians and assistant professor in the Department of Pediatric Surgery at McGovern Medical School at UTHealth.

Hydrocephalus is a condition where a build-up of fluid fills cavities deep in the brain.
At just 1 month old, Wesley underwent his first of many brain surgeries. “Initially, we placed a reservoir in Wesley’s brain to treat his post hemorrhagic hydrocephalus of prematurity,” said Shah.

However, this surgery was not as successful as Jasmine and Andre had hoped. At 4 months old, Wesley needed another brain surgery. “In 90% of cases similar to Wesley’s, there is a further need of cerebrospinal fluid diversion to drain fluid that has built up in their spinal cord and brain. A shunt is placed in a ventricle of the brain that allows the excess fluid to divert to another part of the body,” said Shah. 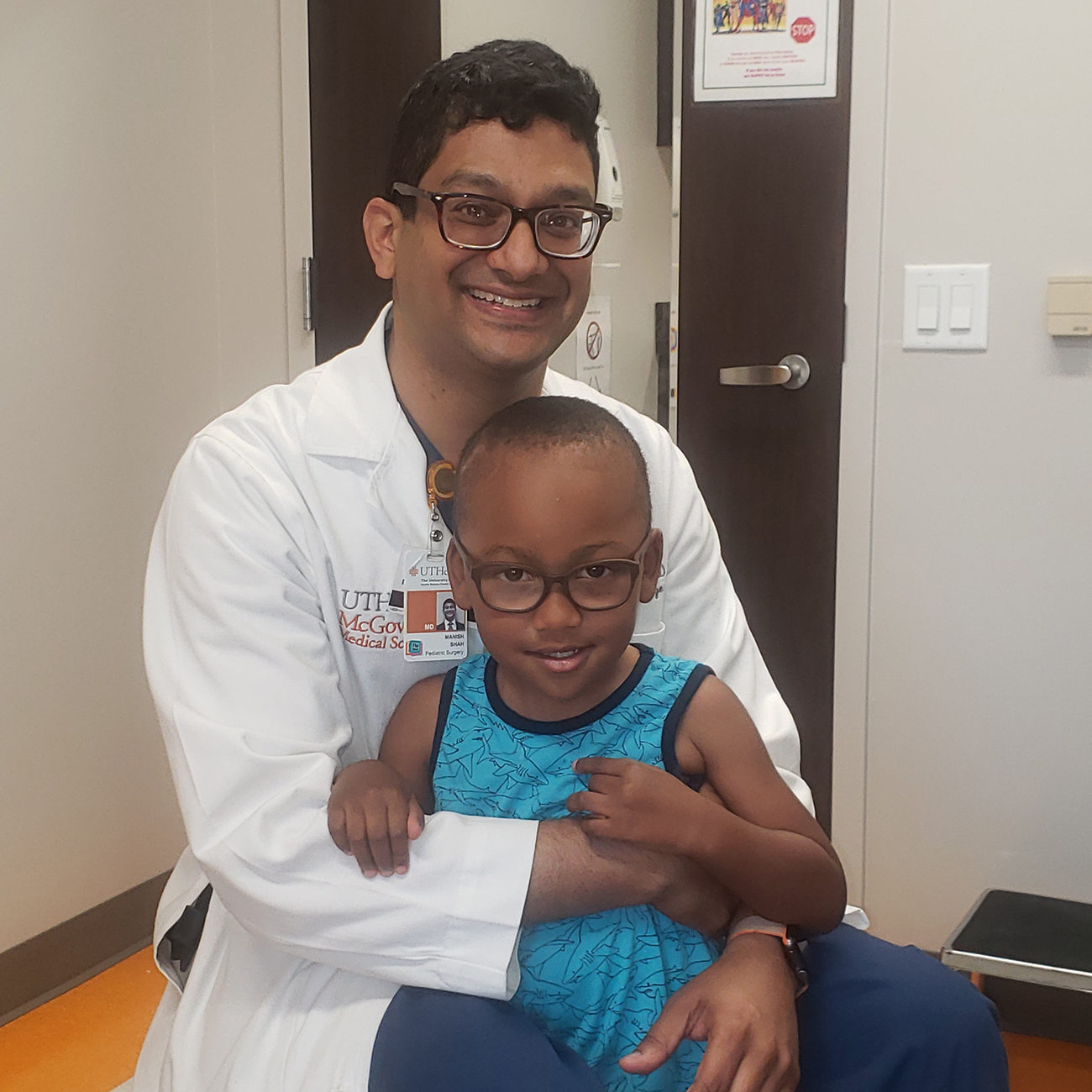 Wesley Hicks during one of his recent appointments with Manish N. Shah, MD. (Photo provided by the Hicks family)

All seemed well until Wesley was around 6 months old. It was then that Jasmine and Andre started noticing signs of a shunt malfunction. Symptoms of this can include sleepiness, seizures, and a constant downward deviation of the eyes. After taking Wesley back to Shah, they learned he had developed a cyst near his shunt, which was the cause of the malfunction. For his third brain surgery, the cyst was drained and Jasmine and Andre thought they could finally take their baby boy home to recover and get back to normal.

Approximately one month after his cyst surgery, Wesley began exhibiting signs of infantile spasms. Jasmine and Andre noticed his eyes watering constantly and his body would sometimes randomly jerk.

Classified as a seizure disorder in infants, infantile spams are common among children with infections, brain malformations, brain injuries and genetic disorders.

Through a family connection, the Hicks were referred to Michael W. Watkins, MD, a pediatric epileptologist with UT Physicians and assistant professor in pediatrics at McGovern Medical School at UTHealth.

“Infantile spasms are associated with a severe and complex form of epilepsy called West Syndrome, and these seizures can be extremely challenging to treat,” said Watkins. “Fortunately, Mr. and Mrs. Hicks noticed Wesley’s infantile spasms very early on, and through clinical observation and video EEG monitoring, we were able to make the diagnosis quickly. Since early treatment is typically associated with a better prognosis, we wanted to start Wesley on the appropriate anti-epileptic medication as soon as possible.”

At this point, Wesley wasn’t mentally developing as quickly compared to other children his age. However, with the introduction of his epilepsy medication, Jasmine and Andre noticed a significant change.

“Getting rid of the infantile spasms, and once we started medication, his development went from zero to 1,000. He’s done so much since then,” said Andre.

As of today, Wesley has had a total of six brain surgeries and a cerebral palsy diagnosis. While he may not understand exactly what he’s been through, he does have the best attitude in spite of it all. If asked “Where’s your shunt?” he will point to the spot on his head where it is located and smile.

The Hickses attribute Wesley’s improvement to the care they received under Shah and Watkins. “We really do consider them family. It doesn’t matter how big or small the worry is, I’ve never felt they’ve been dismissive of our concerns,” said Jasmine.

Currently, Wesley is attending preschool, can walk with little to no assistance and is a whiz on his iPad. Baseball is his current sport obsession. Jasmine and Andre equipped his toy room with his very own t-ball set. With physician clearance, Wesley will soon be out on the field playing and most importantly, being a kid. After everything, that’s something that both Jasmine and Andre can’t wait to see. 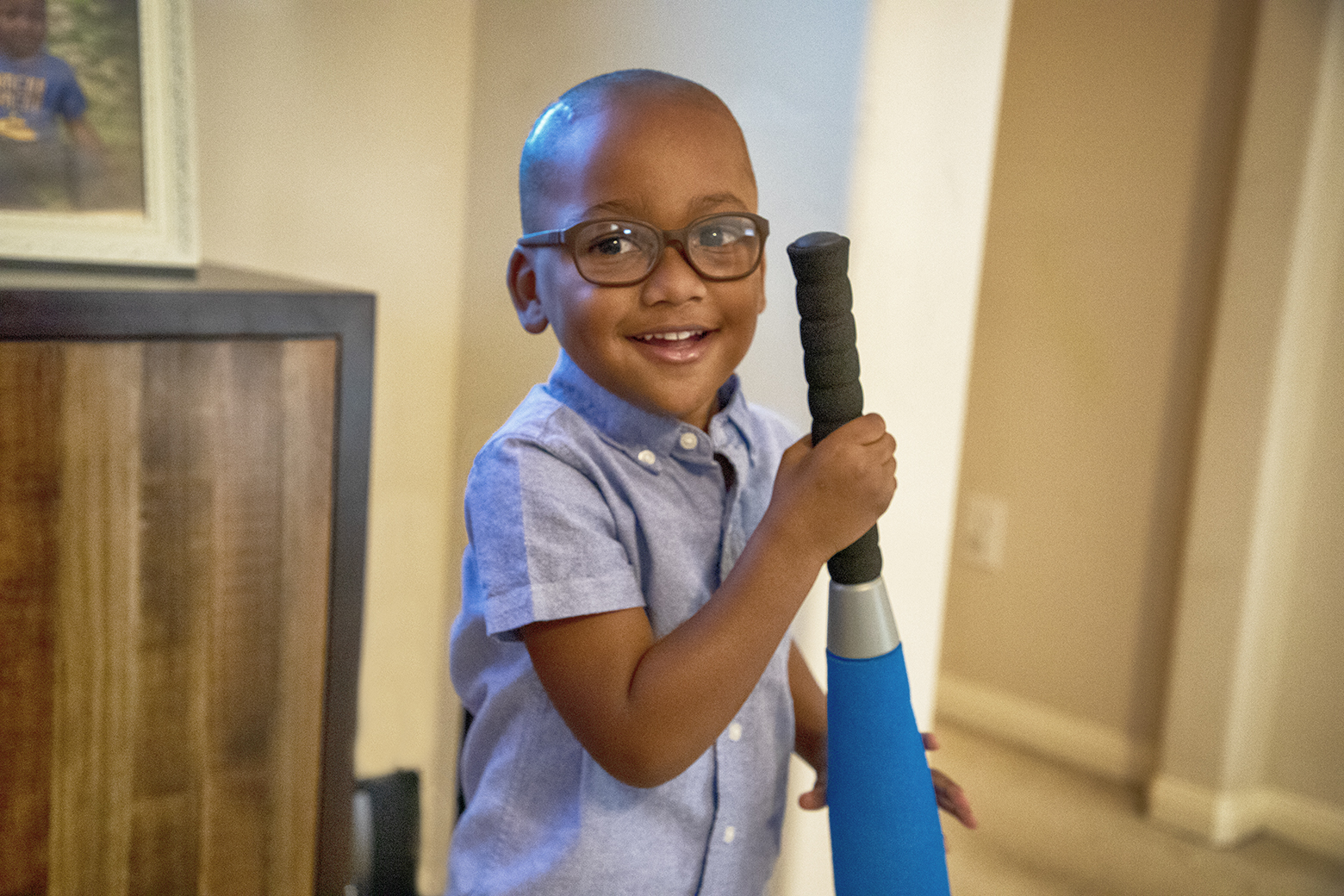 Thanks to the care he received at UT Physicians, Wesley Hicks may be on the field soon with his very own t-ball team. (Photo by Amanda Patterson)