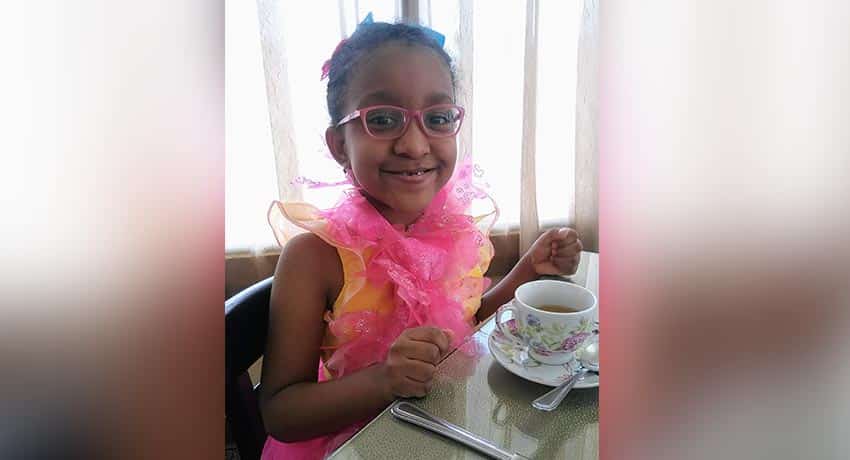 Megan Harvey, now an outgoing 6-year-old, has been a patient of the Texas Cleft-Craniofacial Team at UT Physicians since birth. (Photo provided by the Harvey family)

Flash back to 2013. Jennifer Harvey felt prepared for her second trimester appointment to review her routine blood work. She had been through this before with her two older children. Unfortunately, that appointment was much more of a whirlwind than Jennifer anticipated.

Her maternal blood test results came back positive for spina bifida, a birth defect that occurs when a baby’s spinal cord and spine do not develop together properly. As a result, she was immediately referred to a maternal-fetal medicine physician, a provider who specializes in high-risk pregnancies.

“Right before my appointment with the maternal-fetal medicine physician, the laboratory that processed my blood work called to inform me that there had been an error with my results,” said Jennifer.

Feeling like a huge weight had been lifted off her shoulders, Jennifer decided to keep her appointment with the maternal-fetal medicine physician to review the odd test results.

“My doctor quickly put my mind at ease that the results for spina bifida were negative but he did see something on my latest ultrasound that concerned him,” she said. “He pulled out my ultrasound results and pointed to a spot that showed facial abnormalities.”

That’s how Jennifer learned her daughter would be born with a cleft lip and palate.

“I cried that day in the doctor’s office and then I fixed my face, walked through the parking garage to my car and cried again,” recalled Jennifer. “After that, the weirdest thing happened. I felt a sense of relief – the proverbial shoe had finally dropped. I had all my facts and it was time for me to get to work.”

Jennifer’s background as a former teacher, chaplain, and Child Protective Services caseworker kicked in. Eager to be ahead of the game, she connected with others who had the condition and did as much research as possible to prepare questions for a team of specialists she would soon meet.

At 35 weeks, Megan was born in November of 2013. Before leaving the hospital, Jennifer and little Megan met with a very important and now retired member of the Texas Cleft-Craniofacial Team at UT Physicians, John F. Teichgraeber, MD, a pediatric plastic surgeon affectionately known as Dr. T by his patients. That first meeting marked the beginning of Megan’s medical journey.

Another member of Megan’s medical team is Irene “Leanne” Doringo, MSN, RN, a clinical care coordinator. Doringo plays a unique role on the team, providing emotional and medical support for all cleft patients and families.

“Megan was actually one of my first cleft babies when I assumed my role on the Texas Cleft-Craniofacial Team,” said Doringo. “I remember meeting Jennifer in the hospital after she delivered Megan. Since then, their family has been special to me.”

Those same warm feelings are shared by Jennifer and her family. “Leanne is like family to us,” she said. “In the same year I got divorced, my father passed away, and Hurricane Harvey hit Houston. I was an emotional wreck to say the least. Leanne was a lifesaver and helped us stay focused and up to date with appointments.”

To prepare for her cleft lip repair surgery with Dr. T, Megan underwent presurgical nasoalveolar molding (PNAM). This treatment helps to reshape the nostrils, lips, and gums of a patient before their first cleft surgery.

Megan acted as our PNAM taping model in an educational video that has helped numerous families undergoing the same process. (Video provided by McGovern Medical School)

After her cleft lip surgery at 3 months old, Megan had another surgery seven months later to repair her palate. At the same time, she also had her ear tubes placed. Many children with a cleft palate require tubes to help drain fluid and reduce the risk of infections and hearing difficulties.

In Megan’s first three years of life, she also had two surgeries with a pediatric otolaryngologist (a surgeon who specializes in pediatric ear, nose, and throat problems) for her ear tubes, as well as speech therapy.

An update on Megan

Today, Megan is a happy and outgoing 6-year-old. She’s creative; her favorite things to do are play dress-up and draw. Both Jennifer and Megan are active members of our cleft family team, which meets semiregularly to connect and provide a support system for those who are affected by the condition.

Since Dr. T’s retirement, Megan’s case has been continued by Phuong Nguyen, MD, a pediatric plastic surgeon at UT Physicians who was recruited to take over his practice.

“I first met Megan in March of this year,” said Nguyen, who’s also an assistant professor of surgery and director of craniofacial surgery in the Division of Pediatric Plastic Surgery in the Department of Pediatric Surgery at McGovern Medical School at UTHealth. “While I haven’t been a part of the beginning of her journey, I’m excited and feel privileged to play a role in navigating her future cleft care.”

Megan’s next big step will be an assessment to determine if she will need an additional bone graft surgery to help improve her underbite and allow her adult teeth to come in properly.

“We’ll be ready,” said Jennifer when asked about upcoming procedures or challenges. After working together with the Texas Cleft-Craniofacial Team at UT Physicians for six years of up and downs (mostly ups), Jennifer is confident in the team, Megan, and the bond they’ve all built.

“I know they’ll take care of her. She’s been their baby from birth,” said Jennifer.