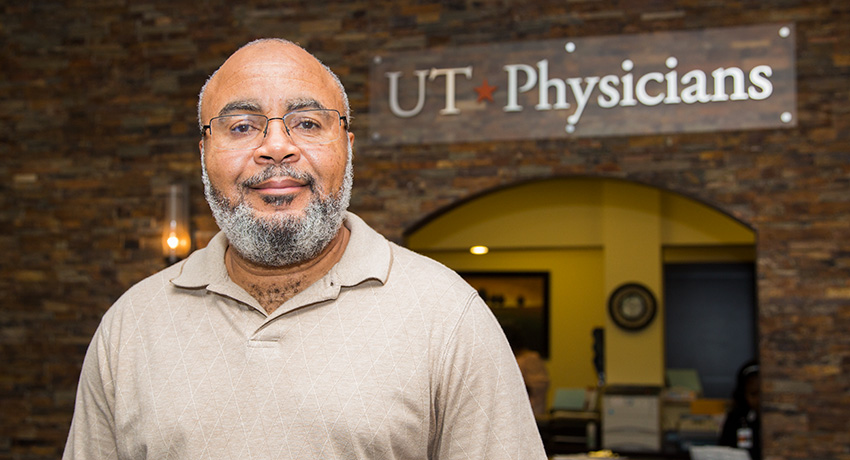 William Saulsberry shares his story of survival and how he is thankful for the care he received from George V. Golod, M.D. Photo credit: Lorenz Meyer, McGovern Medical School

November 6, 2017, is a day that will forever stand out in William Saulsberry’s memory.

“I sincerely believe that I am alive today because of my fateful decision to see Dr. Golod on November 6, 2017, and the immediate action he took,” says Saulsberry, 57. “I’ll never forget the concern he showed and am eternally grateful.”

“We see acutely sick patients, as well as provide wellness and preventative care,” Dr. Golod says, adding that his training in family medicine allowed him to experience many different fields of medicine.

“Since we see such a breadth of conditions, our training exposes us to a lot of different fields of medicine and surgery,” he continues. “I also was very lucky to start my medical career by doing an internship year in general surgery, which exposed me to a lot of critically ill patients.”

Saulsberry’s main concern that day was extreme fatigue, which he says he had been experiencing for several months. At times, he says he also was hyperventilating.

“I couldn’t get appropriate air in my lungs,” Saulsberry explains. “I was trying to control my breathing, in order to stop hyperventilating. I had periods of anxiety because of my breathing.”

After his vitals were taken and within just minutes of his appointment with Dr. Golod, Saulsberry was having an electrocardiogram test, also called an EKG test. An electrocardiogram is a tracing of electrical activity in the heart, Dr. Golod explains.

“Dr. Golod is basically telling me that my heartbeat was very, very erratic,” Saulsberry remembers. “He described it as sounding like it was beating against my chest. He was going through the checklist of things that could cause it. He said, ‘One of the things that we have to rule out is that you have a pulmonary embolism.’”

A pulmonary embolism is like a “heart attack of the lungs,” Dr. Golod describes. “A blood clot develops in a vein and then dislodges and gets “stuck” in the vessels of your lung – making it impossible for blood to get rid of carbon dioxide and load up with oxygen. The bigger the blockage the less oxygen gets delivered to your blood stream.”

Because the clots block blood flow to the lungs, a pulmonary embolism can be life-threatening if not treated promptly.

Upon seeing Saulsberry and reading the results of the EKG test, Dr. Golod quickly determined that his patient was experiencing a major medical crisis that needed emergency care and summoned an ambulance to transport him to the emergency room (ER).

Dr. Golod’s training in family medicine, in both outpatient clinics and hospitals, helped prepare him to identify critical situations, like Saulsberry’s.

“One of my most favorite emergency room attendings told me, ‘You need to rule out what will kill this patient, and if you have not, you have not done your job,’” Dr. Golod says. “This is what emergency room and trauma doctors do every single day, and I took their lessons to heart.”

“Mr. Saulsberry did not look well and fainted days prior,” Dr. Golod continues. “His heart rate was elevated, and he had the classic “something is wrong here” all over his face.”

He adds, though, that Saulsberry’s case was an interesting one, as he did not exhibit the usual symptoms of a pulmonary embolism, which he says are “super tricky beasts” to diagnose.

He says that someone suffering from a pulmonary embolism usually has shortness of breath and chest pain with risk factors such as travel, recent surgery or cancer.

“His only sign was a fast heart rate and syncopal episode,” Dr. Golod explains. “I thought he had suffered an acute cardiac event leading to acute heart failure,” adding that a pulmonary embolism was second on his list of possible diagnoses. “I have never seen a man pass out from a pulmonary embolism before.”

Saulsberry says the experience was “surreal.”

Once in the emergency room, Saulsberry was diagnosed with bilateral submassive pulmonary embolism and admitted to the intensive care unit (ICU) for immediate treatment.

“One of the things I recall vividly is the emergency room doctor telling me my diagnosis,” Saulsberry remembers. “He said, ‘Sir, you received a very serious medical diagnosis. You were diagnosed with a pulmonary embolism impacting both lungs.’ The grave look that he gave and his manner basically put me in a somber mood.”

Dr. Golod says Saulsberry’s heart was having a very hard time pumping blood due to the blood clot. “It’s like squeezing a hose; pressure upstream builds up, so the pump has to work much harder to get past the resistance made by the blockage,” he says.

In the ICU, Saulsberry immediately was administered blood thinners to prevent the clot from growing and to prevent other clots from forming. Additionally, he was treated with the clot-busting medication known as tPA, or tissue plasminogen activator, which works to break up the clot into smaller pieces to relieve the blockage, Dr. Golod says.

Round-the-clock treatment in the ICU was emotionally and physically tough on Saulsberry. “While in the ICU, Dr. Golod paid me a visit, which tremendously lifted my spirits,” he says.

But even before that visit, Dr. Golod called Saulsberry on his cell phone to check up on him.

“The day I was admitted to the emergency room, he actually called my cell phone,” Saulsberry recalls. “He asked me how it was going, and I told him ‘I was 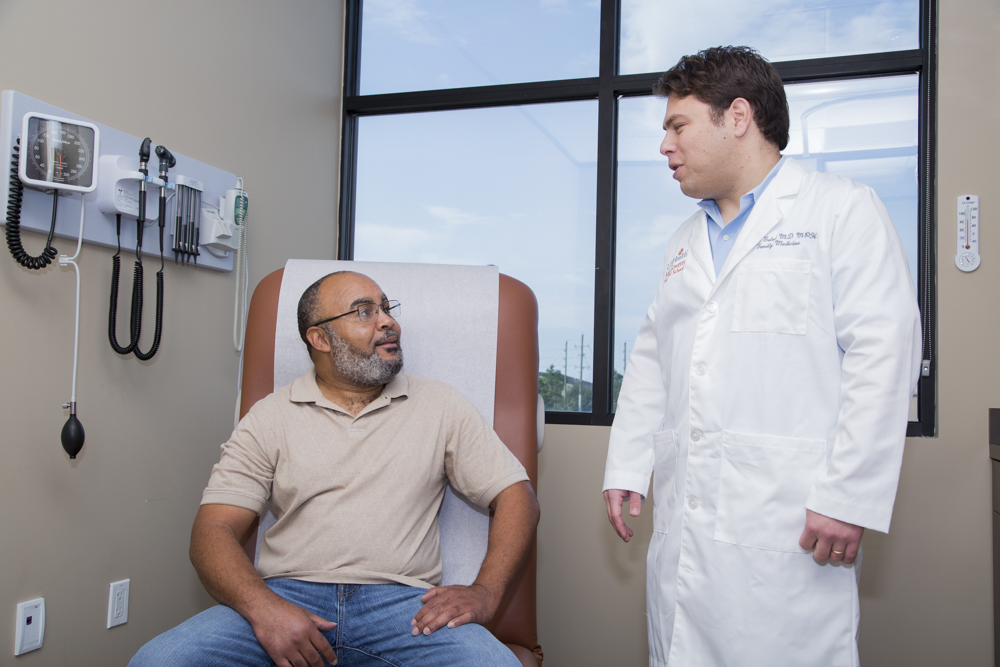 diagnosed with a pulmonary embolism.’ He asked if I would mind if he visited me the following day.”

“I try to visit my patients in the hospital if they are going through something as traumatic as Mr. Saulsberry has,” Dr. Golod explains. “He was on the clot-busting pump in the ICU and could not move. We just chatted a little bit about things that didn’t have to do with health and hospitals, and I tried to make him feel like everything is going to be OK.”

Thanks to Dr. Golod’s quick thinking on November 6, 2017, Saulsberry is OK. He says he’s been prescribed blood thinners “pretty much indefinitely” as part of his recovery.

“Dr. Golod was very instrumental in getting me the care I needed,” Saulsberry adds. “He knew something was wrong just from listening to my heart.”

There’s no telling if Saulsberry’s diagnosis could have been less life-threatening had he sought care sooner.

“It is hard to tell,” Dr. Golod explains. “His presentation was very unusual. A patient rarely survives an embolic event that has led to such a strain on the heart that it leads to a syncopal episode. I am glad he came in when he did.”

“I am so thankful for and impressed with the entire team in our clinic, our amazing nurses, medical assistants and staff, the EMS team and the incredible work that the ER team, radiologists and ICU teams do every single day,” Dr. Golod continues. “There are thousands of people who are dedicated to improving and saving patient lives. We all work as a team, and I am grateful and honored to be a part of it. And I am so very happy that Mr. Saulsberry is doing well.”