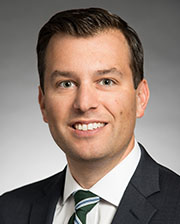 Board Certification:
American Board of Radiology

Dr. Amsbaugh has authored numerous articles and has published in peer-reviewed journals including Head and Neck, Journal of Neuro-Oncology and Cancer. He is the author of several book chapters focusing on the treatment of brain tumors and radiosurgery. He has given invited national and international presentations on a variety of topics. In addition to numerous research awards, Dr. Amsbaugh has received multiple honors including the Emmet J. Conrad Award, The RSNA Roentgen Award and the University of Louisville House Staff of the Year Award.