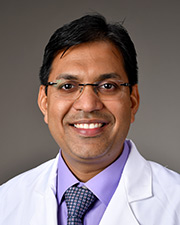 Board Certification:
American Board of Psychiatry and Neurology
Clinical Neurophysiology
Neurology

Rajesh K. Gupta, MD, offers patient-centered care by being thorough, attentive and informative. He treats adult and senior patients for neuroinflammatory or neuromuscular disorders and allocates time to answer any concerns his patients may have. As part of his subspecialty, he sees patients for conditions such as multiple sclerosis, neurosarcoidosis, autoimmune encephalitis, NMO, Lou Gehrig’s disease (ALS), myasthenia gravis, neuropathies, etc.

After completing advanced neurology training, Dr. Gupta worked as a neurologist for Sanford Health. There, he was a director overseeing care for neuro-inflammatory diseases and co-director of the ALS clinic in North Dakota. He also served as an assistant professor in neurology at University of North Dakota.

When not seeing patients, he enjoys swimming and playing cricket.