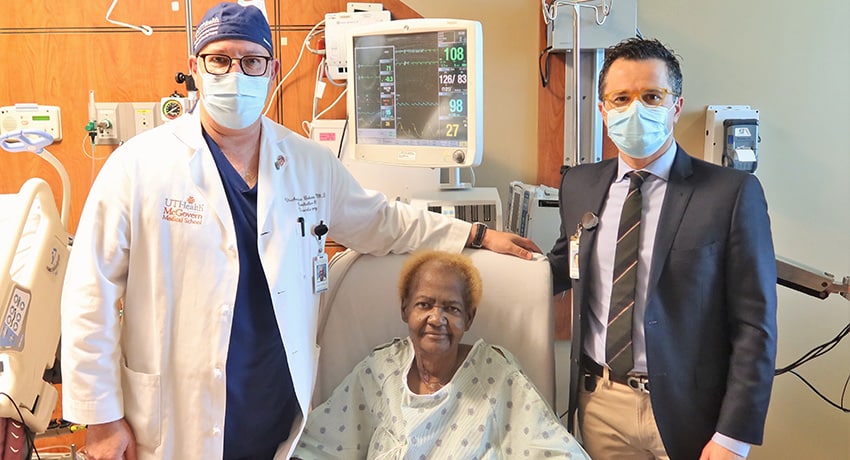 “Will I be home in time for Mother’s Day?” asked Connie Eaglin just moments before undergoing a heart procedure five days before the holiday celebrating moms. A mother of six and grandmother to 18, Eaglin was in need of treatment to fix her failing heart. Just before Mother’s Day, treatment for Eaglin’s high-risk condition allowed for her speedy recovery and timely return to her family.

With her heart functioning at just 20%, Eaglin’s diagnosis was decompensated heart failure caused by critical occlusive coronary artery disease, a condition where the arteries of the heart become blocked, causing the heart to become weak. Eaglin was in severe discomfort. “My belly and legs were swelling so I knew something was wrong,” she said.

Heart failure occurs when the heart becomes so weak it is unable to support the proper functioning of the rest of the body’s organs. “The body suffers when the engine doesn’t work,” explained Viacheslav Bobovnikov, MD, assistant professor of cardiothoracic surgery at McGovern Medical School at UTHealth and cardiovascular surgeon at UT Physicians. Eaglin’s particular diagnosis means the arteries of the heart were blocked so much that the heart muscles were not receiving enough blood, decreasing its overall function.

With a failing heart and worsening symptoms, Eaglin was determined to find a solution. Her cardiologist referred her to Bobovnikov.

“We had to carefully take into consideration the benefits and risks of different treatment options. A hybrid, or a combined approach, was the best way to minimize her risks during surgery and improve the quality of her life,” said Bobovnikov.

“We make decisions with a heart team approach,” said Konstantinos Charitakis, MD, associate professor of cardiovascular medicine at McGovern Medical School and interventional cardiologist with UT Physicians. Patients with multivessel diseases and comorbidities are discussed at our heart conferences and as a group we identify the best treatment plan for that patient,” said Charitakis.

For Eaglin, a hybrid revascularization approach was her best bet for a strong outcome. Hybrid revascularization is a combination of an off-pump coronary artery bypass surgery, which would be conducted by Bobovnikov, followed by a percutaneous coronary intervention (PCI) performed by Charitakis two days later. “This means she receives two low-risk procedures instead of a single high-risk triple bypass,” said Charitakis, who serves as the director of the cardiac care unit at Memorial Hermann Heart & Vascular Institute at Memorial Hermann-Texas Medical Center.

Bobovnikov and Charitakis went over the treatment options with Eaglin and her daughter. “After meeting with the doctors, I knew I was in the right place,” said Eaglin.

Eaglin underwent the off-pump coronary artery bypass surgery, meaning she received an open-heart surgery without needing to go on the cardiopulmonary bypass machine, sometimes called a heart-lung machine. This machine temporarily supports the entire body during surgery, while continuing to provide oxygen to the rest of the organ systems. By not needing it, Eaglin’s risks for complications decreases, “This allows the interventionalist, in this case Dr. Charitakis, to proceed with reduced risk for coronary intervention,” said Bobovnikov.

Two days after her surgery, Charitakis performed the PCI, a minimally invasive approach to repair the remaining two diseased arteries. “For this, we typically enter through a small incision in either the groin or wrist, and deploy stents,” he said.

Eaglin made a full recovery and returned home on Sunday, May 9, the afternoon of Mother’s Day. “I’m grateful for the doctors and happy to not be suffering anymore,” she said. With her heart functioning better, this was her best Mother’s Day yet.