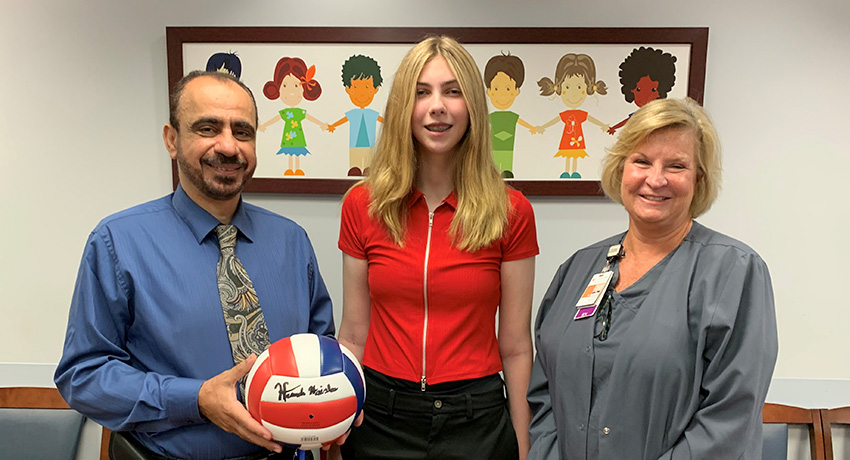 It takes a team: Hannah Haisler gives special thanks to Mohammed Numan, MD, and Ronda McEntee, RN, for helping her manage her dysautonomia throughout the years. (Photo by Andi Atkinson, UT Physicians)

At age 4, Hannah Haisler of Belton, Texas, began screaming “Mom, my eyes!” Before her mother Tammi could respond, Hannah would be unconscious on the ground. These episodes would begin to happen frequently for the next two years, resulting in injuries to her head, neck, and face.

Each time Hannah would collapse, she would turn pale and her body would become hot. Tammi would lie her down, cool Hannah with a wet towel, and wait for her to open her eyes.

Though Tammi would take Hannah to the doctors often, none of them could tell her the root cause or how to specifically help her daughter. It was not until Tammi took her daughter to see an endocrinologist that hope emerged.

“As we were walking to the exam room, Hannah screamed and passed out,” Tammi said. “It was the first time someone in the medical community actually witnessed what I had been telling them.”

After performing extensive tests, the endocrinologist referred Hannah to a neurologist. The neurologist concluded Hannah was suffering from dysautonomia.

Dysautonomia is a malfunction of the autonomic nervous system that regulates heart rate, blood pressure, and other automatic body functions. Symptoms of this malady include dizziness, headaches, and fainting.

“A tilt table test records blood pressure, heart rhythm, and heart rate on a beat-by-beat basis as the table is tilted to different angles with the patient’s head up,” said Numan, professor with McGovern Medical Govern at UTHealth Houston. “It’s used to determine the causes of dizziness and fainting.”

In Hannah’s case, when the table tilted to 70-degree angle, she passed out.

“It was scary because I couldn’t hear her heartbeat anymore. It stopped for less than 10 seconds, but it was so long and hard for me because I just wanted to help her,” Tammi said. “Dr. Numan told me she was safe and they wouldn’t let anything happen to her. He asked me to please let him test her just a little longer to gather more data.”

From the test, Numan confirmed Hannah’s diagnosis: severe autonomic dysfunction (dysautonomia) with neurocardiogenic syncope (a sudden drop in heart rate or blood pressure that leads to fainting) with cardiac asystole (when the heart stops beating).

The physician also identified the cause and stressors.

“The dysautonomia was occurring due to increased vagal tone, which negatively impacts the heart and blood vessels. The vagal tone in Hannah’s case could be triggered by dehydration, stress, viral illness, or heat,” Numan said.

In short, Hannah’s vagus nerve, which relays signals between the brain and internal organs, was not performing well from her brain to her heart.

“We learned her heart would work too hard, go into distress, stop, and cause Hannah to black out,” Tammi said.

Numan immediately prescribed medication to help correct Hannah’s dysautonomia. He gave her guidelines to follow, such as drinking unlimited water, increasing salt and potassium intake, starting anti-gravity exercises, and staying out of the heat. He also taught Hannah to squat when she would begin to lose her vision or feel dizzy to help the blood flow back to her brain and heart.

“We got her on the medication, and we started taking the doctor’s advice, and she responded very well,” Tammi said.

“Her senses are highly acute. A smell can nauseate her, or a loud noise can trigger a migraine. She can get motion sickness in the car. And there is her temperature intolerance,” Tammi said. “There are some things that just can’t be wiped away, but Hannah works through them. She knows her triggers, and she knows what to do. She’s become an expert at managing her condition, and she’s good at voicing what she needs.”

Hannah continues to see Numan twice a year and has not had a serious episode in at least seven years.

“We’ve got her daily care plan fine-tuned,” Tammi said. “We work with her school to make sure she’s allowed to get water as often as she needs, takes her medication after lunch, and isn’t exposed to hot conditions. They’ve been great to work with, and she’s thriving.”

Now 14, the teenager is heading to a new school – high school! Hannah is a straight-A student who takes advanced classes and a music student who plays piano and saxophone. She is also a competitive athlete.

At nearly 6-foot, 2-inches tall, people easily mistake Hannah for a basketball player, but her passion lies in volleyball.

“She discovered it two years ago. We weren’t sure whether to let her play, but volleyball is played indoors in air conditioning. The coaches of Heroes Volleyball assured us they would not push Hannah’s boundaries, so we let her try out,” Tammi said.

Hannah made the community volleyball team, but she needed more physical therapy to prepare her body for the fall season by increasing her strength and endurance.

“Hannah’s improvement was incredible, and she was able to play volleyball without complications. It didn’t take her long to become a top player,” Tammi said. “Her team just participated in a state tournament that was three days long, playing 27 back-to-back games. I worried she would hit a ceiling, but she was fine.”

Tammi believes the exercise from the sport is helping Hannah.

“Dr. Numan did tell us that 50% of her treatment would be medication, and the other 50% would be exercise,” Tammi said. “He was right.”

It is still uncertain how Hannah developed dysautonomia, especially at such a young age. However, the “why” does not matter.

“We needed to know how to help her, and Dr. Numan and the team at UT Physicians gave us those answers,” Tammi said. “Dr. Numan and Nurse Ronda (McEntee) have helped us every step of the way getting Hannah from one level to the next. They’re long-distance, but they’re very responsive. It feels like they’re in my backyard.”

On June 6, 2022, Tammi sent an email to the doctor and nurse with “victory” photos of Hannah’s recent volleyball tournament and her most recent report card.

“In the beginning, people were labeling the child as lazy or seeking attention, and her mother was really devastated because people thought she was making it up in her head,” Numan said. “I’m glad we were able to help Hannah live a better quality of life and become a high achiever.”

As for Hannah, she does not dwell on the challenges of her dysautonomia or her traumatic episodes as a child. She is too busy living her life.

“I think it’s just because I’ve had it for so long. I grew up with it. I have a handle on listening to my body, so my illness doesn’t stop me much,” Hannah said.

When she is not studying, playing volleyball, or practicing music, the teen enjoys spending time outdoors in cooler weather. She enjoys photographing nature and wildlife, playing with her dogs, Gabby and Rusty, and going on thrill-seeking rides.

“She likes zip lining, carnival rides, and bungee jumping. We still place some limits on her. For instance, we haven’t gotten her a skateboard or bike, but she still gets to do most of what she wants,” Tammi said. “She’s definitely two handfuls.”

Hannah chooses to look ahead – way ahead. The student-athlete not only plans to play volleyball in high school, she plans to continue playing in college as she earns her doctorate in psychology.

“Hannah is actually very successful at the things she wants to do. She is determined and does everything she wants despite her dysautonomia,” Tammi said. “When I begin to worry, she says, ‘Mom, I’ve got this.’”