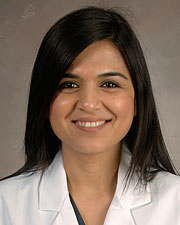 Residency
The University of Texas Health Science Center at Houston, 2016

Asha Bhalwal, MD, was born in India and earned her medical degree in Mumbai at K.J. Somaiya Medical College and Research Centre in 2003.  She trained as an OB/GYN in London and obtained her membership from the Royal College of Obstetricians and Gynecologists.

After marrying, Bhalwal and her husband moved to Houston where she did a second OB/GYN residency at McGovern Medical School at UTHealth

Bhalwal has over 15 years of experience in the field of OB/GYN, with special interest in advanced minimally invasive gynecologic surgery, cervical dysplasia and colposcopy. She is associate co-director of the AMIGS Fellowship Program.

Bhalwal currently is a Fellow of the American College of Obstetricians and Gynecologists.

Bhalwal resides in Cypress, Texas with her husband and two children. She enjoys yoga, cooking and running.