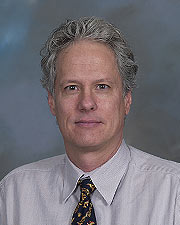 Board Certification:
American Board of Pediatrics
General
Pediatric Gastroenterology

Fellowship
The Hospital for Sick Children, 1986

J. Marc Rhoads, M.D., was inspired to become a physician by a childhood experience.

“My best friend, Mike Newman, died of bone cancer when we were teenagers,” said Dr. Rhoads, division director and professor of pediatric gastroenterology at McGovern Medical School at UTHealth. “He wanted to be a doctor. He was part of an NIH study on immunotherapy to try and cure him. It made an impact on me to see him sick and learn about research.”

It was in Bangladesh during medical school at Johns Hopkins, where Dr. Rhoads began to hone his interest in gastroenterology. “It is a very poor country with a high infant mortality rate,” Dr. Rhoads explained. “Children were dying every day of diarrheal disease. I wanted to investigate super oral rehydration therapy and be a part of future research.”

Dr. Rhoads is a pediatric gastroenterologist who specializes in the treatment of diarrhea, inflammatory bowel disease, colic, celiac disease, abdominal pain. His research studies focus on the benefits of probiotics in several models of human disease. His other research interests include gut microbiome, autism spectrum disorders, and the GI tract and autoimmune disorders. He has contributed to numerous health articles that can be found on the National Center for Biotechnology Information.

He provides compassionate, evidence-based care but will consider alternative “outside the box” treatments for his patients. He primarily sees infants, children and adolescent patients.

When not practicing medicine, he enjoys traveling with his wife, playing classical and contemporary piano, and traveling abroad.