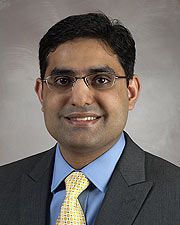 Board Certification:
American Board of Surgery

Board certified in surgery and vascular surgery by the American College of Surgeons, Dr. Saqib’s clinical focus is in minimally invasive aortic reconstructions, peripheral endovascular interventions and medical management of vascular diseases. He earned his medical degree in King Edward Medical College, completed internship and residency in general surgery at the University of New Mexico and later completed a fellowship in vascular and endovascular surgery at the University of Pittsburgh, Pennsylvania.

Dr. Saqib has authored numerous journal articles, abstracts and book chapters on various topics related to vascular surgery, including aortic pathology, peripheral vascular diseases and wound healing. He has been awarded a number of academic awards, including Alpha Omega Alpha. He is a member of the Society of Vascular Surgery, Society for Clinical Vascular Surgery, Eastern Vascular Society and the American Medical Association.