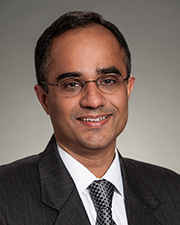 Nitin Tandon, MD, is a professor of neurosurgery at McGovern Medical School at UTHealth and practices at Memorial Hermann Hospital – Texas Medical Center. He is currently chief of the epilepsy surgery program at Memorial Hermann Mischer Neuroscience Institute.

Dr. Tandon has served as a clinician at UTHealth since 2004 and has recently formed the Texas Institute for Restorative Neurotechnologies (TIRN) to study and develop new treatments for brain disorders. He has performed over 3,500 brain operations, including more than 1,500 for brain tumors and 900 for epilepsy.

Dr. Tandon specializes in the surgical treatment of epilepsy and has pioneered a number of innovative technologies and minimally invasive approaches including robot-assisted stereo-electro-encephalography and laser ablation. In parallel, his research interests yield fundamental insights into the processes of cognition and epilepsy using intracranial recordings, non-invasive imaging data, and cortical stimulation. These discoveries will pave the way for innovative rehabilitative and neuro-prosthetic approaches to the resolution of brain disorders such as intractable epilepsy.

Dr. Tandon’s research is currently funded by several National Institutes of Health grants including a BRAIN initiative award, and by the NSF. He has authored over 75 peer reviewed publications in journals such as Nature Neuroscience, Brain and JAMA Neurology and is a member of several professional organizations. He is a clinical leader in the treatment of epilepsy, as well as an avid scientist delving into its underlying causes and future therapies.