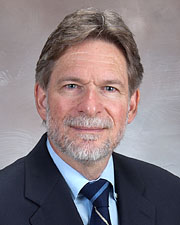 Board Certification:
American Board of Dermatology

Ronald Rapini, MD, grew up in Akron, Ohio as the oldest of four children. He attended medical school at Ohio State University, and did an internship in Wisconsin at Marshfield Clinic, where he met his wife, Mary Jo Rapini. They have two adult daughters and three grandchildren.

Dr. Rapini trained in dermatology at the University of Iowa, and in dermatopathology at the University of Colorado. He moved to Texas in 1983, when he joined the the McGovern Medical School at UTHealth. The family moved to Lubbock, Texas from 1994 to 2002, where Dr. Rapini became the chair of dermatology at Texas Tech University. In 2002, he was recruited back to UTHealth to head an integrated department at the medical school and MD Anderson Cancer Center.

Dr. Rapini specializes in seeing patients of all ages with problematic skin cancers and rashes, and is frequently a consultant for patients with difficult problems referred from dermatologists and other physicians throughout the region.