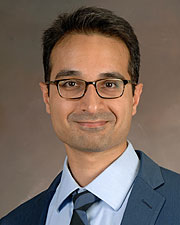 Board Certification:
American Board of Psychiatry and Neurology
General
Vascular Neurology
Vascular and Interventional Radiology

Dr. Sheth is currently an assistant professor of neurology at McGovern Medical School at The University of Texas Health Science Center at Houston (UTHealth).

Endovascular treatments for acute ischemic stroke have revolutionized our ability to restore patients suffering from stroke back to health. However, many questions still remain. Dr. Sheth’s research interests include improving our understanding of who benefits from endovascular treatments for ischemic stroke, and how to best treat these patients. His work uses both clinical research techniques as well as advanced neuroimaging analyses to address this question. In addition, Dr. Sheth leads an effort to identify blood-based biomarkers that could improve our ability to diagnose stroke at its very onset.

Dr. Sheth has co-authored many studies, which have been published in Cell, Nature Biotechnology, PlosONE, and the Journal of NeuroInterventional Surgery. For his research work he has been awarded grants from the American Heart Association (AHA), Society for NeuroInterventional Surgery Foundation, and National Institutes of Health. He has also received numerous honors and awards including the AHA International Stroke Conference Junior Investigator Travel Award, American Academy of Neurology (AAN) Resident Scholarship Award, American Society

EARCH of Neuroradiology Trainee Award, and the Henry Asbury Christian Award for Excellence in Independent Research from Harvard University.