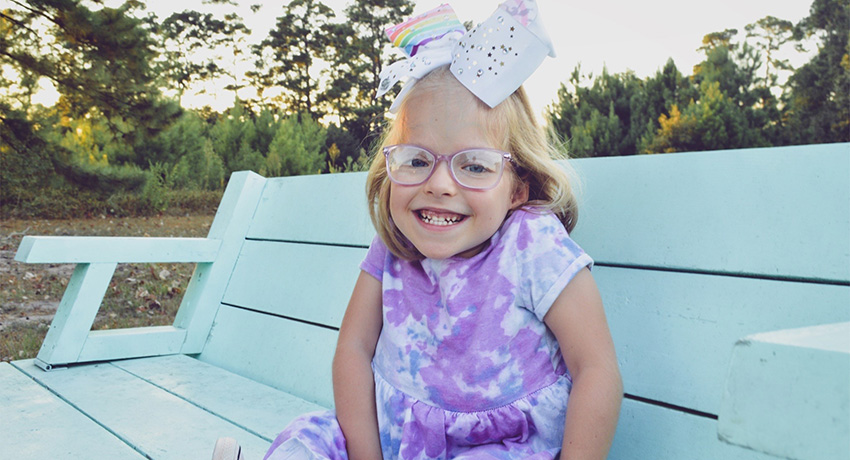 Jessica Lingor remembers the crisp December day nearly six years ago when doctors diagnosed her yet-to-be-born daughter, Kaylie, with spina bifida — a type of birth defect in which a baby’s spinal cord fails to develop or close properly while in the womb.

“At that point, we didn’t know if she would live through birth,” said Jessica, who was 20 weeks pregnant at the time. “It was a very hard Christmas.

Today, however, Kaylie is a bubbly 5-year-old who loves playing with Barbie dolls, getting homemade manicures, and playing house in the adaptive kitchen that her parents, Jessica and Matt, made for her. The kitchen — customized for Kaylie’s small stature — is just one of many ways the Lingors aim to give their daughter a normal life.

“We try to adapt as much as we can, especially when it comes to accessibility and Kaylie’s mobility,” Jessica Lingor said, noting Kaylie crawls when she isn’t in her wheelchair. “But what we’ve learned is that kids with spina bifida are like snowflakes: everybody is different, and everyone’s symptoms are different.”

About 1,427 babies are born with the condition each year across the country, according to the U.S. Centers for Disease Control and Prevention. They often suffer from physical and intellectual disabilities that range from mild to severe, depending on the size and location of the defect and whether part of the spinal cord and nerves are affected.

Kaylie’s case is particularly severe. She suffers from hydrocephalus, meaning there is excess fluid in and around her brain; craniosynostosis, or a misshapen skull; scoliosis; and chronic hip dysplasia, making her unable to walk. She also only has one kidney and is prone to seizures.

These issues require regular medical attention, which the Lingors realized the day Kaylie was born. By the same token, she has brought together multiple doctors with UT Physicians at The University of Texas Health Science Center at Houston (UTHealth Houston) who are united in their mission to help Kaylie lead a happy life.

Within hours of her birth, Kaylie was whisked away to an operating room, where pediatric neurosurgeon Manish Shah, MD, carefully repaired the exposed part of her spinal cord by reconstructing a spinal sac around the spinal cord and placing the neural tissues back in the spinal canal. Shah then called upon pediatric plastic surgeon Matthew Greives, MD, to help him close the muscle and the skin and complete the procedure.

“We always do our best to repair the spinal cord within a day or two of birth,” said Shah, an associate professor of pediatric neurosurgery at McGovern Medical School at UTHealth Houston, where Greives is an associate professor and director of plastic and reconstructive surgery. “The plastic surgery team helps us fashion skin over these defects and close them correctly in order to prevent meningitis.”

Shortly thereafter, Shah placed a small, hollow tube — known as a shunt — into Kaylie’s brain to help drain the extra fluid. The procedure, which is done to prevent brain injury associated with hydrocephalus, generally remains effective for about 10 years.

However, the procedure wasn’t the first time Shah and Greives had joined forces to help a patient, and it certainly wouldn’t be the last. The two, who are just six days apart in age, both joined UT Physicians and McGovern Medical School in August 2014, with Shah joking that the clinical practice recruited a best friend for him.

Multispecialty collaborations like these are common for physicians who see patients with spina bifida. Shah and Greives teamed up again four years ago to perform a cranial vault remodeling procedure on Kaylie.

During the procedure, they remodeled the bones of Kaylie’s skull, creating a more normal head shape while giving her brain more room to grow.

“The goal with any of our surgeries for patients with multiple medical problems tied to spina bifida is to focus on improving their quality of life,” Greives said. “Everything we do with Kaylie is in a step-by-step fashion: How much do we need to do, and how will it benefit her right now? Kaylie isn’t a one-and-done situation; she requires a whole team of people looking at her and seeing how she’s progressing. There have been some complications along the way, but it’s one of the reasons everybody here knows Kaylie.”

Over the years, Kaylie’s presence has also become a highlight for pediatric orthopedic surgeon Lindsay Crawford, MD, who continues to treat issues surrounding the 5-year-old’s spine, hip dysplasia, and feet. Kaylie is among many patients shared by Crawford and Shah, who work together in the spina bifida program within the UT Physicians Pediatric Surgery – Texas Medical Center clinic.

Already, Crawford has made casts of both of Kaylie’s feet — one is a club foot, and the other is affected by congenital vertical talus (CVT), a rare disorder that presents itself as an extreme case of flatfoot. On the left club foot, Crawford performed two surgeries designed to release Kaylie’s Achilles tendon, with a posterior medial release scheduled for later. On the right foot with CVT, Crawford performed a minor bone realignment procedure and is slated to perform a tenotomy, or tendon release, in the future.

“Even though spina bifida starts in the back, it affects the nerves that go all the way down to the legs, so without these surgeries and the utilization of braces, Kaylie would not be able to wear shoes or work on skills like standing up,” said Crawford, an assistant professor of orthopedic surgery with McGovern Medical School at UTHealth Houston. “We’re trying to get Kaylie’s feet into normal positions so that she can fit into her shoes since she’s starting school.”

Although Kaylie has already endured numerous obstacles in her short life, Crawford said her extroverted patient always comes into the clinic with a smile. She’s also done more than her fair share of advocacy work, including serving as grand marshal for a Christmas parade that brings awareness to spina bifida, appearing in promotional materials for the spina bifida clinic, and continuing to educate the general public about the condition in children, in between her appointments with UT Physicians.

“Those doctors have taken care of Kaylie from the beginning, and they’re the most consistent thing we have in her medical care,” Jessica Lingor said. “If we need anything, we’ll call them. They’ve been a godsend, for sure.”