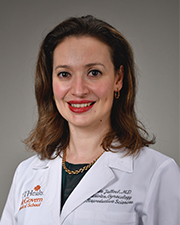 Board Certification:
American Board of Obstetrics and Gynecology

Dr. Jalloul is certified in Fundamentals of Laparoscopic Surgery (FLS). When surgery is needed, she strives to provide a minimally invasive approach to allow for a speedy and smooth recovery. This includes laparoscopy, robotic surgery, and hysteroscopy. She also offers many office-based procedures including colposcopy, loop electrosurgical excision procedure (LEEP) cervical conization, and hysteroscopy. Since 2013, Dr. Jalloul has performed over 600 surgeries, including complex minimally invasive vaginal and laparoscopic procedures.

Dr. Jalloul is an associate professor at McGovern Medical School at The University of Texas Health Science Center at Houston (UTHealth Houston) and serves as the associate program director for the residency program. She is also in charge of the laparoscopic and vaginal hysterectomy simulation program for resident education. She is completing her master’s degree in Clinical Research and is a lead mentor for the residents’ research projects.

Native from Lebanon, Dr. Jalloul completed her graduate medical education at Saint Joseph University in 2005 and a four-year residency in obstetrics and gynecology at the American University of Beirut. She then moved to the United States where she went on to excel during her second four-year residency in obstetrics and gynecology at Henry Ford Hospital/Wayne State University, in Detroit, Michigan. There, she received several awards, including the prestigious AAGL (American Association of Gynecologic Laparoscopy) award for excellence in endoscopic surgery and the Hippocrates award, in recognition of the resident who best practices the Art of Medicine.