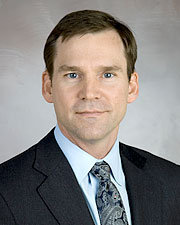 Board Certification:
American Board of Surgery

Dr. Todd Wilson graduated from the United States Naval Academy and then served as a Surface Warfare Officer in the Navy for six years. He left the Navy as one of the highest decorated officers in his year group to pursue a career in medicine. He attended medical school at The University of Texas Medical School at Houston (now McGovern Medical School) and then continued at the same school for both his residency in General Surgery and then fellowship in Minimally Invasive Surgery.

Still loving the school, Houston, and the amazing Texas Medical Center, he joined the faculty of the Department of Surgery in an effort to teach others and provide the best, most state of the art care for his patients. His focus is on advanced and minimally invasive surgical therapies for disorders of the gastrointestinal system, metabolic disorders, and the abdominal wall (hernias).

He is well known and respected in the surgical community, is an active participant and leader in multiple surgical societies, and has published and presented many times to the national and international community of surgeons. He is a dedicated and devoted teacher and has won numerous accolades including his personal favorite, the chief resident class of 2015, “Resident Advocate.”

Medical Director of Surgical Innovation and Robotics Institute for the medical school, Department of Surgery