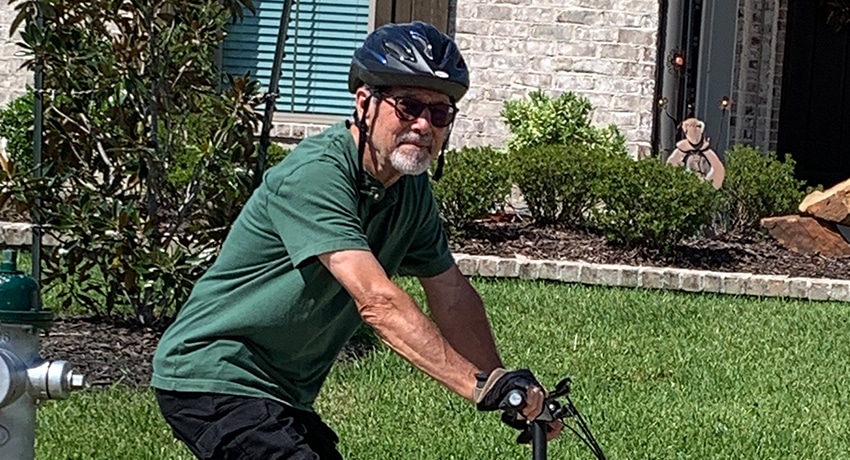 Glen Provost remains an active cyclist and outdoorsman thanks in part to his AFib treatments. (Photo provided by Glen Provost.)

Thanks to the methodical approach of his physician and innovative medical technologies, 79-year-old Glen Provost of Beaumont, Texas, no longer worries about his atrial fibrillation (AFib) and suffering a life-changing stroke.

“My dad had a major stroke in his mid-70s. He survived it, but he had total right-side paralysis until he died at 87,” Provost said. “When I learned I had AFib, I was worried I could end up the same way.”

“When the top heart chambers beat too fast, there is not enough time for a full squeeze, so blood slows down. This may cause the blood to turn more solid and into a blood clot. When the heartbeat is too slow, it can also reduce blood flow to the brain and muscles,” Hematpour said. “Either scenario leads to decreased energy and increased risk of stroke.”

Because his symptoms were subtle, Provost never suspected he had AFib.

“I actually don’t really know how long I had it. I’ve always been pretty athletic, and I’ve always had a very low heartbeat,” Provost said. “I would just get these little sensations in my heart. They were so mild, I really didn’t pay any attention to them. If I started to feel drowsy from them, I would just sleep it off.”

In late 2019, the retired university administrator decided to see his primary care physician (Bal Reddy, MD) as his condition progressed.

“I was relaxing and sitting on my recliner at home. The fluttering sensation in my chest was lasting longer, and I was feeling really lightheaded. I decided it was time to get checked,” Provost said.

His doctor determined his heart rate was too slow due to AFib. He then referred Provost to Hematpour, assistant professor of cardiovascular medicine and clinical cardiac electrophysiology with McGovern Medical School at UTHealth Houston.

Provost was unable to take medication because it would further slow down his heartbeat, so Hematpour first implanted a pacemaker in his chest and set it to a resting rate of 60. Then he was given medication to control erratic heart pulses.

When the drugs did not sufficiently control Provost’s AFib, Hematpour proceeded with cardiac ablation. This procedure zaps and scars areas of the heart to block irregular electrical signals and restore a normal heartbeat.

“Dr. Hematpour told me ablation doesn’t always work the first time. So when I had another AFib incident after the first ablation, he went ahead and performed another one,” Provost said. “The ablations worked. I was required to take blood thinners, but my AFib was under control.”

The patient, however, would undergo one final procedure to better suit his lifestyle.

“I’m a cyclist and am outdoors a lot. I’m also a woodworker and use power tools,” Provost said. “Even though the ablation and blood thinners were working, I worried about having an accident and the risk of severe or even fatal bleeding.”

So Provost could stop taking blood thinners, Hematpour recommended a cardiac filter. This device, which is implanted in the pouch-like part of the heart, can effectively help prevent blood clots.

“I trusted Dr. Hematpour and agreed to have him put it in. It worked like a charm and was a game-changer,” he said. “Now I’m no longer on blood thinners. The only thing I take is a baby aspirin each day, but that’s a very mild blood thinner.”

Now the retiree regularly rides about 15 miles on the hike-and-bike trail near his home without any concerns.

“It’s fantastic. I don’t worry about Afib anymore or getting injured,” he said. “Of course, I know there’s always at least some risk that I could still have a stroke at some point down the road, but I’m comfortable knowing my chances are far less.”

Provost appreciates the deliberate and progressive care he received from Hematpour and the EP Heart team.

“It started with the least invasive treatment and culminated to the most advanced treatment. Every step and consideration was taken to ensure the best possible outcome,” he said.

“AFib is a multifaceted disease. We don’t jump on any treatment strategies ahead of time. We wait until we know for certain the areas to repair and the best procedures to use,” Hematpour said. “Mr. Provost’s case was actually not a difficult case. It was just a unique case in that he ended up receiving all the available AFib treatments in a stepwise fashion.”

“His quality of life significantly improved over the course of two years, so we reached our goal,” Hematpour added.

Hematpour advises people, especially as they grow older, not to ignore any symptoms of fatigue, shortness of breath, dizziness, and/or heart fluttering.

“Mr. Provost did have symptoms. They were just vague. The common belief is: ‘If I don’t have chest pain, I’m fine.’ That’s a completely wrong assumption,” Hematpour said. “Even if something seems minor to you, tell your doctor to make sure it’s not AFib or another cardiac condition.”

Provost is just grateful he was in the right time, right place.

“I’m fortunate all these innovative procedures were available in my lifetime. My father wasn’t as lucky,” he said. “I also lived within reach of UTHealth Houston. I was provided with the best care available anywhere in the world.”