Bell in 1996 before her weight loss journey. Photo provided by patient.

College life is supposed to be a fun, exciting time filled with adventure and new experiences. In the summer of 1996, this was not the case for Susan Bell. The stress of college, late nights, bad diets, and dorm food resulted in out-of-control weight gain – tipping the scale at nearly 300 lbs.

Bell endured uncomfortable stares, judgmental eyes, and negative perceptions. The environment was so overwhelming that she became depressed, stayed isolated, and had very few friends. She tried every diet with no success.

After college, Bell got married, but was still very unhappy. She used food as an escape and gained even more weight. She was on the verge of developing high 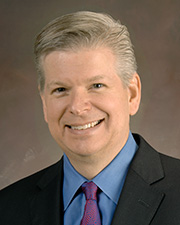 blood pressure and diabetes. It was a wake-up call – she yearned for positive change, for both her mental and physical health.

In 1997, Bell underwent a bariatric procedure called vertical banded gastroplasty, also known as stomach stapling, which reduces the stomach’s capacity from 40 ounces to 4 ounces and limits food intake. This resulted in Bell losing 100 lbs. in a year. She felt great, had a wider range of movement, and noticed how people treated her differently based on her new appearance.

“I went to nursing school overweight and graduated after losing most of it,” said Bell.

Bell has received criticism from some of her peers for ‘“taking the easy way out.’ However, she is quick to point out that not everyone follows the same journey to attain happiness.

Thirteen years after her initial weight loss surgery, Bell was suffering complications, such as indigestion, acid reflux, and rapid weight gain. Fortunately, with the help of Erik B. Wilson, MD, bariatric surgeon with UT Physicians and professor of surgery at McGovern Medical School at UTHealth, Bell started on another journey that not only helped her maintain her weight loss, but also molded her personality in a positive way.

Bell’s background as a nurse helped her understand that her symptoms meant something was wrong. Through physician referrals and research, Bell decided to schedule a visit with Wilson to help uncover what was going on. A diagnostic exam revealed that she had a hiatal hernia, some sutures from her first bariatric surgery ruptured, and there was scar tissue present.

“Popular in the ’80s and ’90s, vertical banded sleeve gastroplasty was the standard surgical procedure for weight loss,” said Wilson. “It condenses the stomach so it can’t expand.”

Two options were presented to Bell – remove the hernia and repair the suture line or undergo revisional gastric bypass surgery. One choice would address her symptoms, the other would start her on a new lifestyle journey. After carefully researching both of her options, gastric bypass surgery was the choice she made.

The minimally invasive surgery was performed by Wilson and was a success. Bell only spent three days in the hospital for recovery.

“With Susan’s old procedure, she could not eat solid foods,” said Wilson. “Now, she can.”

Wilson emphasized that Bell’s surgery was a great example of what you can experience with revisional surgery.

“Gastric bypass is an option when diet and exercise haven’t worked or when you have serious health problems because of your weight,” said Wilson. “Surgery can reset your set point so you can restart your journey.”

“Dr. Wilson gave me a tool, and I used it to lead a healthier lifestyle,” said Bell. “In order to ensure long-term success, I still follow a guided plan to monitor my nutrition and food intake.”

offers individualized counseling, and both nonsurgical and surgical solutions.

“Susan is a great example of her embracing the process and choosing to eat better foods,” said Wilson. “It’s a continual journey to help patients get re-engaged and make better choices.”

Bell’s weight loss journey has inspired her reach out to support others who are also struggling with their weight. If you are considering bariatric surgery as an option, Bell, a practice manager for

UT Physicians Internal Medicine – Texas Medical Center, recommends that you find a surgeon who is not only experienced in bariatric surgery, but can also continue to support and guide you throughout the entire process.